Todd Dills
Jul 4, 2022
Three small fleet owners spoke to concerns with and/or efforts to insulate themselves from California's AB 5 contractor law, which will be allowed to apply to trucking businesses after the Supreme Court declined to hear the recent challenge. Shown here are working and show rigs from all three -- clockwise from top left: Santa Clara-based A&D Equipment, Antonio and Sons Trucking of Fresno, and Lil Ray's Transport, out of Salinas.

The day I arrived in Merced, California, last week, also happened to be the day the Supreme Court conferenced to make what ultimately was its final decision on the California Trucking Association's case against the AB 5 law's ABC independent contractor test and its application to trucking. The next day, on the Merced County Fairgrounds, site of the second annual A.J. Soza Memorial Truck Show, the California contractor law was most certainly a topic of discussion, and considerable uncertainty for many there.

For some, it's more than that, too, feeling like it amounts to a potential existential threat for business-to-business relationships with longtime owner-operators in de facto exclusive relationships. That was the case for Andy Chavez Sr., owner of A&D Equipment, contracting directly with construction-related and other outfits for hauling needs in the region around his business' Santa Clara home base. Chavez choked up at the prospect of the AB 5 law getting in between him and his dedicated owner-operators, many in longtime relationships with the company that evolved with mutual benefit into a small trucking family, of a fashion.

For Chavez and so many other small fleets, the businesses they've built and the relationships they've formed, well, they just mean more than anything you can put a price tag on. "All these guys are dreamers, every single one of them," he said, also pointing to the dozens of owner-ops and small fleet owners displaying out at the show. The small-business entrepreneurs "all have families, they get up every day, they get up early in the morning and do the work."

The owner-operators who run more or less exclusively contracting with A&D Equipment, Chavez said, pay a percentage-of-the-load fee for use of the company's trailers, but do have freedom to go and do whatever they want, perhaps landing them within qualifications of the business-to-business exception to AB 5.

Yet reality is A&D Equipment "subhaulers" -- California trucking's common shorthand for owner-operators without federal DOT motor carrier authority contracting job by job, trip by trip with motor carriers and/or owners with federal DOT authority who run for multiple carriers/brokers -- don't often stray far from A&D's customer base. That's simply by virtue of the fact that "I keep them busy enough," Chavez said, with direct contracts with outfits that in some cases stretch back two decades to the business' founding in 1999. "It’s a handshake and a promise from me to keep them busy.

"We're all just hardworking truck drivers," Chavez said, himself included, pulling today with his son, Andy Chavez Jr., as he trains him up on combination work in a 2020 Peterbilt 389 and Landoll 930.

Ray Rodriguez, owner of Lil' Ray's Transport out of the Salinas "lettuce capital of the world," he said, similarly hauls a lot of rolling and other equipment, but for customers among the ag community, particularly during planting and harvesting season in his area, when demand outstrips the three-truck fleet's ability to keep up with customers' freight without the help of temporarily contracting subhaulers. Rodriguez, like Chavez, was in something of a wait-and-see mode when we spoke at the Merced show, but thought that if the Supreme Court ultimately did make the decision to allow AB 5 to come into effect for trucking, his relationships with those owners would survive.

All were federally authorized freight carriers in their own right, Rodriguez said, who migrated between contracting companies, whether his largely in-state seasonal freight or others' to both his north and south in Arizona. "It’s a seasonal deal for me, my job, what I do," Rodriguez said -- at its busiest between January and May he might have as many as 28 otherwise independent owner-ops running for his customers. "I've been doing it for 45 years now," and the nature of the operation could well satisfy the business-to-business exception to AB 5, with some Is dotted and Ts crossed.

As with Chavez, too, many of those seasonal relationships with owner-op businesses are longstanding -- "some of the guys have been here with me since I started," he said.

Steps taken to satisfy the AB 5 exception as a small fleet contracting with owner-operators include making certain a written contract exists spelling out terms of the agreement, among myriad other factors. Transportation attorney Spencer Mynko, headquartered in Rancho Cucamonga, in a recent newsletter noted the B2B exemption to the ABC test codified in California AB 2257 "is attainable with meticulous attention to detail." Clients of his he described as "proactive" around AB 5 have already anticipated a negative outcome to the CTA's suit and "made certain that their business practices satisfy the business-to-business exemption, and their independent contractor agreement is up-to-date. They are moving forward with confidence."

Find a complete list of requirements for meeting the B2B AB 5 exemption below.

[Related: Supreme Court will not hear AB 5 challenge, law will go into effect for trucking]

Dominic Gonzalez, meanwhile, son of the founder of 28-truck Antonio and Sons Trucking out of Fresno, was in a similar position to Rodriguez, yet had long ago made concrete steps to insulate the business, which also contracts with a variety of subhaulers during almond season to serve principal customer growers in the region. The vast majority of the fleet's work is within California, moving almonds by "dry van, flatbed, hoppers, and containers to the port of Oakland -- it's home every day, local work, mostly," Gonzalez said.

Among modifications to written independent contracting agreements the fleet's made ahead of the Supreme Court's rejection of potential consideration of CTA's appeal include a the requirement that owner-ops incorporate or establish their business entity as an LLC to haul under the company's authority, likewise recognition of the seasonal reality -- subhaulers there go elsewhere when the almond season goes dormant annually.

If Antonio and Sons Trucking, among other observers and trucking participants, is right, predictions of the demise of the owner-operator in California might well be more than a little overblown. As one California-based watcher told me this morning, if there is to be a demise, "the elimination of the owner-operator is not going to be an overnight thing out here."

At the A.J. Soza Memorial Truck Show, it wasn't just the truck-show scene in California that felt strong to me, but rather the commitment among small fleets to a business model in which they were born and reared, and in which they've flourished, a commitment to do whatever it happens to take to preserve it.

As Andy Chavez Sr. put it, waving his arm in the direction of the huge show lot filed with well more than 100 examples, "These guys work hard, and get up at 2-3 in the morning, do their runs, then go home, see the family and take off again." They haul building materials, heavy construction equipment, food, water and wine, he noted. "That's the infrastructure of this country. They want to break up these guys who are doing all this, but they’re working their butts off. They’re the hidden heroes that nobody talks about, but they’ll [complain] when the shelves are empty. ... Thank a truck driver. That’s what you’ve go to do."

12 keys to satisfying the B2B ABC test exemption, directly from the text of the AB 2257 legislation that codified it: 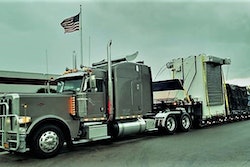 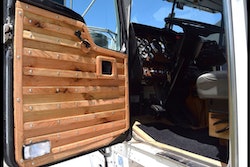