3Feathers Mobile Marketing founder Norm Blanchard, based near Nashville, Tenn., has in his office space what might be the most unique desk that I’ve ever seen. The trucker-designer-company owner saved a 1962 Mack B61 tractor from salvage following the closing of its former Pulaski, Tenn.-based fleet, then turned the truck’s nose into a desk front to serve as adornment to separate Blanchard from visitors to his office location — and from competitors, he hopes, given the visual/ideational creativity the 3Feathers operation requires. (He runs through more about the desk in the video above.)

The business is not only focused on hauling display trailers, after all. 3Feathers is an experiential marketing company capable of managing projects for brands from conception to design, build and movement, Blanchard says.

Blanchard, in his early 50s after some background in freight hauling and, in more recent decades, music management, turned back toward his roots and harnessed his graphic design and custom-build capabilities in the 3Feathers venture. The business is the owner of a banana yellow 2007 Freightliner Columbia, and most of its revenue to date has come from design work for a few brands. But look for big things to come.

You can also catch more about the venture at the 3Feathers website. 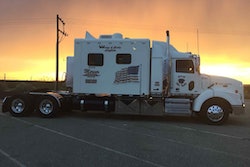 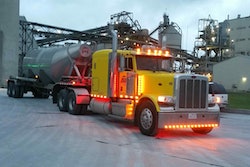 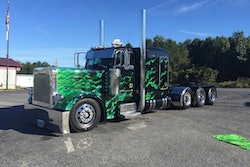