You can’t hide them lyin’ eyes

I caught him cheating red-handed.

There were signs, I had my suspicions, but I chose to ignore the clues. Sometimes it’s just less painful to pretend.

It became evident I was going to have to confront him, when I found notes in the bathroom, tucked between the pages of our 4 State Trucks Chrome Shop Mafia catalog.

He was cheating. He was looking at aftermarket parts for a Peterbilt. 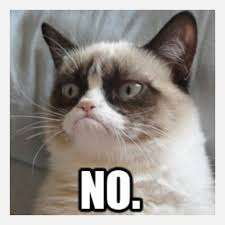 I brandished the book at him, causing his little scraps of gross Peterbilt love notes to flutter around.

“What the hell are you doing looking at Pete parts? Making notes about them? You do remember that Freightliner parked outside, right?”

“Well good morning to you too, Sunshine of my life.”

“Don’t be nice to me. What’s going on with the sudden Pete fascination? I noticed. I just didn’t say anything when I saw you ogling Petes at GBATS.”

“We’re already at ‘ogling’ and it’s 8:30 in the morning. Awesome. Baby, I’m just lookin’. I really like some of the aftermarket stuff they have for the old Petes.”

“I knew it. You’re going to leave us for a Peterbilt. Is she younger? I will lose all respect for you if she has a Cummins engine, I swear it. Gross.”

“I’m not sure I get that part, but I promise you I’m not leaving you for a Peterbilt and I love our Freightliner as much as you do.”

“Wrong. No one loves that truck like me. I wouldn’t even look at another Pete. Please tell me you didn’t look at Peterbilt parts while laying in the bunk of our Freightliner.”

“You looked at Troy Huddleston’s Freightliner with envy while you sat in our Freightliner.”

And instead of re-hashing the “is”/“is not” argument that eventually devolved into unkind remarks about his general person and my eyebrows, let’s just suffice it to say I caught him, red-handed.

He can’t hide them lyin’ eyes. 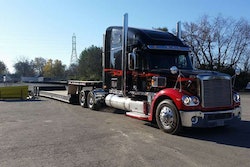 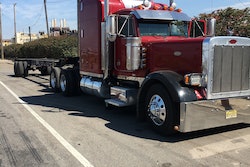 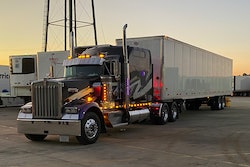