Todd Dills
Jun 6, 2017
Approximately one in every nine Overdrive readers operates exclusively under one of the different intrastate hours of service rules. The large majority of those in-state haulers are in Texas, California and Florida. Those states allow for more drive time (12 hours) and on-duty time (15 or 16 hours) in their daily limits. Their cumulative limits are higher for in-state haulers, too, though states treat those limits slightly differently.

The short answer: As a matter of regulation, no. The electronic logging device mandate is written in a manner that is more or less agnostic to the hours of service rule a particular driver is operating under.

Hence so many states’ ability to adopt the federal regulations for ELDs with relative ease and speed. This went unnoticed by most watchers until it mattered, when Texas, with a massive intrastate market as well as an intrastate hours rule that differs significantly from the federal rule, adopted the mandate by reference with some addenda.

But when it comes to picking an ELD for intrastate operation, choose wisely if your state has significant hours differences from the federal rule. If the device doesn’t support your rule in its functionality, you might not benefit from compliance warnings and quick-glance counters that most devices supply.

“The ELD mandate technical specifications do not mention anything about the [60 hours in seven days or 70 in eight days] cycle rule or exceptions that a CMV driver is currently operating under, and that information is not captured in the required data output file” in roadside inspections, says Ryan Johns, chief technology officer for ELD provider KeepTruckin. “That said, KeepTruckin has implemented a number of state-specific rules to help drivers and safety managers avoid HOS violations.”
Among those supported by KeepTruckin’s app are the California, Texas and Alaska intrastate rules, plus several Canadian rules. From the admin account where an owner-operator would set up a driver profile, there’s also an option to select “Other” for the applicable rule, allowing for the program to work on a baseline recordkeeping level like a slightly more automated paper log, with little added compliance assistance in computing available hours.

Compliance assistance, however, is a feature some operators appreciate about e-logs. An owner-operator of a Bakersfield, California-based small fleet wrote Overdrive in April with concern that he was having a “hard time finding companies that have the California [intrastate] hours of service and agriculture exemptions.”

Many prominent providers of ELD hardware and software support California’s intrastate rule. However, the agricultural exemption, similar to the base rule but with longer cumulative on-duty limits and a shorter rest period (and no restart), was supported by only one manufacturer the operator had contacted at that point.

“So far, Rand McNally is the only player,” he said. Two other prominent providers he’d consulted didn’t support the ag exemption. J.J. Keller’s Encompass log-auditing system, which the small fleet uses, supports the California ag-rule sets in its log-auditing component, but not in the mobile app that powers the associated ELD.

Nonetheless, in the view of Tom Reader, J.J. Keller marketing director, support for differing rule sets in ELD applications is necessary for the value proposition of minimizing the compliance burden. Keller Encompass “has 18 rule sets built into the app,” Reader says.

“The driver can choose which rule set applies to him or her. … These features are present to ensure proper compliance and remove doubt or confusion around regulations.”

Ravi Kodavarti, Rand McNally’s director of product management, concurs that ELDs ought to deliver benefits beyond just bedrock compliance. A basic-compliance-only device “wouldn’t be telling the driver how much time you have left to drive, a key part of the value proposition.” 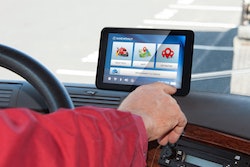 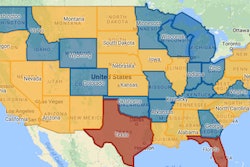 Interactive map of the intrastate ELD mandates as of June 2017 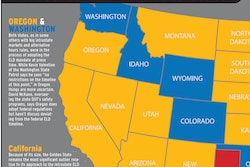