Two more exemption requests from the electronic logging device mandate have been filed by two associations whose drivers operate within the trucking industry. Both requests seek full exemptions from the use of ELDs for their respective drivers, who mostly operate in short-haul situations.

The Federal Motor Carrier Safety Administration also announced it has denied an ELD exemption request from the Pipe Line Contractors Association (PLCA) that was filed in July.

One new ELD exemption request comes from the Motion Picture Association of America (MPAA). The other new one is from the Western Equipment Dealers Association (WEDA) on behalf of itself and seven other agriculture equipment dealer associations. The FMCSA is seeking input from the public on the requests.

MPAA’s request is to allow truckers hauling equipment for theatrical, television and movie production sites to use paper logs at all times rather than ELDs. The group says it is seeking the exemption because drivers often work for different studios and production companies, who may use different ELD providers that are incompatible with each other. Therefore the drivers would be unable to transfer ELD data from one carrier or vehicle to another. MPAA adds that allowing its drivers to continue keeping paper logs “will not jeopardize operational safety or increase fatigue-related crashes.”

The group says the approximately 6,500 drivers who operate within their industry often spend less than four hours a day driving and average 40 miles per day. It says few of the drivers qualify for the short-haul log-keeping exemption because many of them already operate under an exemption from typical hours-of-service driving and on-duty time limits.

Comments on this request can be made here through Nov. 27.

WEDA’s exemption request would apply to agriculture dealers who often transport farm equipment to and from the dealerships for farmers and ranchers, usually within 150 miles of the dealerships.

The group says the approximately 6,000 dealers included in the request already operate under an exemption that is separate from the short-haul exemption in which equipment dealers are exempt from log-keeping regulations during state-defined harvest and planting seasons while transporting farm supplies for agricultural purposes from the dealership to a farm within a 150 air-mile radius. The exemption, however, doesn’t cover transportation of equipment from a farm to a dealership for repairs.

WEDA says the ELD rule creates confusion because, depending on the state definition of harvest and planting season, a dealership may be required to install ELDs for only a couple of months each year. Additionally, the group says there is also confusion as to whether the short-haul exemption applies on trips from farms to dealerships, if the farms are within 100 miles of the dealership, since the agribusiness exemption does not cover the trips back to dealerships.

Because of the confusion, WEDA says its dealers will likely install and utilize ELDs to ensure they avoid penalties and potential shutdown orders. As a result, the group says dealers will have shorter hours of operation when hauling equipment to and from farms, which in turn will cause increased costs and downtime for farmers and ranchers.

Comments on this request can be made here through Nov. 27.

Finally, FMCSA announced its decision to deny the ELD exemption request made in July by the Pipe Line Contractors Association because the group did not demonstrate how it would maintain the same level of safety without using ELDs. 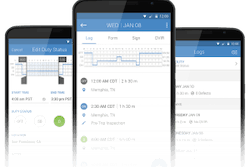