Carrier LVL pays attention to costs and precise timing to turn a profit delivering for the U.S. Postal Service

Neither snow nor rain nor heat nor gloom of night stays LVL Inc. from its appointed routes as a contracted mail carrier for the U.S. Postal Service. Their contracts — some of which cover 365 days a year — say they will deliver on time.

In its mail delivery operation, LVL runs mostly daycabs, both leased and owned.

North Little Rock, Ark.-based LVL has hauled mail as its primary business on routes primarily in the Midwest and Southeast since 1947, says President Rick Vassar, whose grandfather started the business. “Mail is a different animal from freight. Everything that we run is a set schedule. Drivers can set their watch by it. They know where they’re driving and where their layover points are going to be. You don’t have the day-to-day dispatch and management of drivers [like you do with general freight].”

In this tightly controlled environment, carriers are under the gun to watch their outlays. In the last several years, the USPS has been running a deficit and trying to cut costs where it can. Vassar says the USPS has focused on reducing transportation expenses when renewing contracts, which come up every two or four years. “You have to run lean and mean,” he says. “You really have to watch your tire and battery costs and equipment — and operate with as few people as you can.”

One major expense area for carriers is maintenance. Vassar says costs were increasing at the same time the USPS was reducing payments. About a year ago, LVL contracted with Penske for a full-maintenance lease for about half of its fleet. Routine maintenance is at a fixed cost, and Penske takes care of preventive maintenance and servicing items such as tires, batteries and lights on LVL tractors.

Vassar is also focusing on aerodynamics. The company has tested belly fairings under trailers and FreightWing side skirts as well as Nose Cone wind deflectors on trailer fronts. Air Tabs, too, on seven trucks likewise boost fuel mileage. On a test of four trailers on one of its runs, LVL’s mileage has increased to 7.3 mpg, compared with a fleet average of 6.5 mpg. Vassar is aiming for 7.5 or better.

Vassar says it costs about $3,200 all told to retrofit a trailer with aerodynamic add-ons. He estimates the company could save $90,000 a year if it can improve fuel mileage by 0.5 mpg.

Vassar anticipates he’ll be able to nudge fuel mileage up a bit more when he replaces the 20-plus trucks he leases next year with models equipped with 2010 engines. The company is on a two-year trade cycle because the mail delivery trucks run 270,000 to 320,000 miles annually. LVL’s fleet consists of about 50 power units, all but 10 of which are assigned to mail hauling. The others carry brokered freight throughout the United States. Thirty of its 75 trailers are assigned to mail.

The Penske lease covers 18 daycabs and four sleepers, while LVL owns about 30 trucks, which are mostly daycabs. All of the trucks are Freightliners, primarily Cascadias.

LVL has been buying Freightliners since the 1970s and exclusively for the past 12 years. “It’s a dependable truck,” Vassar says. “The serviceability is good, and the dealer network is good. Most are open 24 hours a day, 7 days a week, and are located along interstates and highways where we travel.” When Vassar buys Freightliners, he buys them through Truck Centers of Arkansas, a dealership with three locations he and a partner bought three years ago.

For drivers who crave a reliable, fixed route, delivering mail at LVL is ideal. Most routes are slip-seat runs where a driver takes over for another driver at a specific point at a predetermined time. Driver wages are set by the U.S. Department of Labor, with hourly pay ranging from $21 to $25, including a baseline rate and benefits. “Turnover is very low on the mail side,” Vassar says. 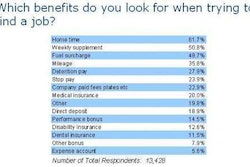