Update: The strikes at Los Angeles area ports have ended at three of the four drayage companies truckers were protesting against. Click here to read the updated story.

Truckers  at a fourth Los Angeles drayage company began striking last week, continuing a months-long protest by port drivers at LA-area ports who want to be classified as employees, not contractors.

Gold Point Transportation truckers began picketing Oct. 30 at the company yard and the Los Angeles and Long Beach ports. Jose Torres, an El Salvador immigrant, said he thought GPT had hired him as an employee. But when he filed his income taxes, his accountant told him the English paperwork he signed was a truck lease.

The day before at Port of Los Angeles, Teamsters General President Jim Hoffa held a press conference on the IBT strike and the new partnership with the center, which strives to improve working conditions in the region’s logistics sector. 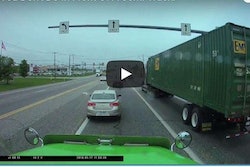 What not to do in front of a semi