Kenworth says its hydrogen truck is expected to be ready for initial track and on-road testing in the fourth quarter of this year.

Kenworth says the two T680 tractors will be identical, with the exception of their power generation systems.

Each truck will have an electric-only range of approximately 30 miles, and the on-board fuel – hydrogen or natural gas –will provide sufficient range for a full day in regional haul applications. Kenworth’s work on these programs is supported by grants of $2.1 million for each project from the U.S. Department of Energy (DOE) Office of Energy Efficiency and Renewable Energy (EERE), with Southern California’s South Coast Air Quality Management District (SCAQMD) as the prime applicant.

A third project received $4.8 million in funding from the California Air Resources Board (CARB), again with the SCAQMD as the prime applicant. Kenworth will build four additional, hybrid-electric T680 day cabs equipped with the Cummins Westport ISL G Near Zero NOx engine operating on compressed natural gas, and will also support customer field tests of these units in Southern California drayage operations.

Kenworth will build its first unit for this project in 2018. Kenworth says its engineers will be able to make design and system refinements to this 2018 unit based on data collected from this year’s real-world testing of the initial, 2017 hybrid-electric T680.

All six prototype T680 day cab drayage tractors, produced as a result of these Kenworth programs, will transport freight from the Ports of Los Angeles and Long Beach to warehouses and railyards in the Los Angeles basin. 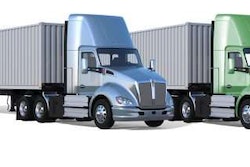