Four survivors of the June 7 New Jersey Turnpike truck crash that left comedian James McNair dead and actor Tracy Morgan in critical condition are suing Walmart Transportation, claiming the private carrier was “careless and negligent” in its oversight of drivers and equipment, which led to the crash, the lawsuit alleges.

Tracy Morgan is among those suing. The suit was filed July 10.

The Walmart driver, Kevin Roper, reportedly was awake for 24 hours prior to the crash, though the National Transportation Safety Board in its preliminary crash report said he was within his hours-of-service limits, both in on-duty time and in driving time.

However, Roper had to commute in his personal vehicle 700 miles to the Walmart terminal in Delaware where he worked, the lawsuit notes and news outlets have reported. During the commute he was not on-duty.

The lawsuit stems from Roper’s odd commute, alleging “Wal-Mart knew, or should have known, Mr. Roper was awake for more than 24 consecutive hours immediately before the subject accident.” The lawsuit alleges Roper fell asleep at the wheel, ultimately leading to the crash.

Walmart issued a statement responding to the lawsuit, saying it is cooperating with the investigation and is “committed to doing the right thing.”

“This has been a terrible tragedy,” the statement says. “We wish Mr. Morgan, Mr. Fuqua Jr., and Mr. Millea full recoveries. Our thoughts continue to go out to them, their families and friends, as well as to the families and friends of everyone involved, including Mr. McNair who lost his life. We are deeply sorry that one of our trucks was involved. As we’ve said, we’re cooperating fully in the ongoing investigation. We know it will take some time to resolve all of the remaining issues as a result of the accident, but we’re committed to doing the right thing for all involved.”

The private fleet also failed to factor in driver commutes into its scheduling, the suit claims.

In addition to Morgan, comedian Ardley Fuqua Jr. is a plaintiff, along with Morgan’s personal assistant, Jeffrey Millea, and Millea’s wife Krista. The group — along with two others, including James McNair — were traveling in a Mercedes Sprinter van from one comedy show, where they were performing, to another.

Roper has been charged with counts of vehicular homicide and assault by auto, to which he has pleaded not guilty. NTSB’s report concluded that Roper was traveling more than 20 mph over the posted 45 mph speed limit.

The crash also made the debate over the 2013 hours-of-service rule a national issue, causing lawmakers and celebrities to condemn Senate action in June to rollback certain HOS regs.

The Senate’s annual Department of Transportation funding bill includes an amendment that would suspend two of the 2013 rule’s 34-hour restart provisions, including the once-per-week limit and the requirement that the restart include two 1 a.m. to 5 a.m. periods.

New Jersey Senator Cory Booker proposed an amendment to strip that amendment from the bill. However, the bill has been idle in the Senate for nearly a month now. 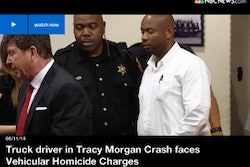