The Senate unveiled Sept. 22 a short-term government spending bill meant to stave off a government shutdown by funding the government through early December, but the bill does not include any provisions related to hours of service reform, as had been rumored.

Reports indicated lawmakers would use the bill to fix a “legislative glitch” initiated last December that could remove the 34-hour restart from hours of service regulations, meaning truckers could not use a restart if they wanted. But the Senate bill, made public Thursday, includes no such fix.

The Senate and the House have floated proposals this year to clear up the problem, but legislative gridlock has prevented either chamber’s legislation from passing.

The short-term spending bill offered a must-pass avenue for lawmakers to rewrite last year’s legislation. Given the high stakes of the legislation, however, lawmakers sought a “clean resolution,” free of riders like an hours-of-service fix. The House still may propose its own version of a government funding bill, meaning there’s still a chance the short-term funding bill could include hours of service-related provisions.

Both the Senate and the House must pass an appropriations bill before Sept. 30, when government funding is set to run dry. If lawmakers do not act, non-essential government operations would shut down until lawmakers pass funding legislation and the president signs it. 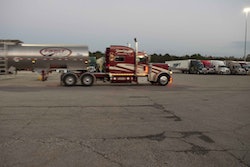