With the results of a new Department of Transportation study signaling the removal of the 1 a.m. to 5 a.m. provision and the once-per-week limit from truckers’ 34-hour restart regulations, trucking industry organizations are lauding the DOT for its findings that these provisions offer no “net benefit,” according to a letter from the DOT Office of Inspector General. Those provisions, per Congressional directive, will be permanently buried.

The Owner-Operator Independent Drivers Association, American Trucking Associations, The Trucking Alliance and the Truckload Carriers Association all issued statements of support for and agreement with the study’s results Monday afternoon.

“It’s not only common sense, it’s trucker sense,” said OOIDA executive vice president Todd Spencer. “We have always championed the need for flexibility in the hours-of-service regulations so that drivers can drive when rested and avoid times of heavy congestion or bad weather conditions.”

ATA President and CEO Chris Spear said in a statement that the organization was pleased with the results that found “no benefit to the onerous and unjustified restrictions” associated with the 34-hour restart.

“The release of this report closes what has been a long, and unnecessary, chapter in our industry’s drive to improve highway safety,” Spear said. “Congress repeatedly told the Federal Motor Carrier Safety Administration that rules of this nature must show a benefit to safety and this report clearly shows there was no benefit.”

David Heller, vice president of governmental affairs for TCA, said the results of the study “support what the industry has been saying all along” that the 2013-issued rules provide no “net benefit to the industry.

Heller added that TCA looks forward to working with President Donald Trump and his administration “on promulgating future rules regarding truck drivers’ hours-of-service that make sense for the whole industry.”

Lane Kidd, managing director of The Trucking Alliance, called the results of the study “a win for the industry” because it means the industry doesn’t have to “cope with yet another change.”

Kidd added that the restart study was doomed from the start because there wasn’t enough data to back up the 2013 restart rules, as they were only in effect for from July 2013 to December 2014 before being suspended by Congress.

More on the restart study can be found here. 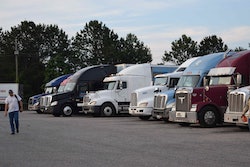 Severe weather prompts another hours of service suspension in GA