Following the news last week of an appropriations-bill measure that could hold import for change in cumulative on-duty limits in the hours of service, readers sounded off again on just where they feel the hours of service should be. Responses ranged from “leave well enough alone already” to pleas for simpler regs and an oft-repeated desire for a return to pre-14-hour-rule regs, when it was possible to split sleeper periods in any way desired.

Hear a round-up of viewpoints at the bottom of this post, as well as at the top of our Mailbag playlist above.

The committee-level Senate appropriations bill is far from becoming law, as previously reported:

In essence, the change the Senate bill specifies would rely on the outcome of a DOT study, also required by Congress, that is in the process of assessing whether June 2013 restart rules were more or less safe than the rule implemented in July that year. If the study is certified to show that the pre-July 2013 restart rule is the better one, truckers would continue to be able to utilize the restart any time, as they are today. But upon use of a restart, an on-duty limit of 73 hours in the prior 7 days would come into play.

Essentially, users of the restart would be required to recap the prior 7 days to be certain they remain under a 73-hour on-duty limit over that time period, while limited by 70 hours in 8 days (or 60 in 7, depending on the rule utilized) ahead of them.

“Must have an ELD just to compute my hours, crazy!” quipped one reader under the news here on OverdriveOnline.com, summing up a lot of the frustration with the complexity of and pace of change within the hours of service that has been the norm over the last decade.

In my view, these most recent proposed changes should be seen as something of a compromise with safety groups and others who favor the death of the restart provision altogether.

Following the previously reported legislative foul-up in December 2015, if the DOT study mentioned above comes back showing that the changes put in place in July 2013 had no beneficial safety effect, the restart is in danger of disappearing. But without those July 2013 limitations of once-per-week use and the inclusion of two 1-5 a.m. periods in any restart, safety advocacy groups charge that drivers who routinely max out available driving hours could, with multiple uses of the restart in a given week, drive around 80 hours in a seven-day period.

Should all stars align, that is — not that the world really works that way, as you know. In any case, the 73-hour cap seems to be an attempt to eliminate that possibility while still preserving the restart as an option.

Given the complexity of the proposed change, though, it’s no wonder (as you’ll hear in the podcast) that a desire for the simplicity of pre-14-hour-rule regs is such a topic of discussion of late. What’s your view? 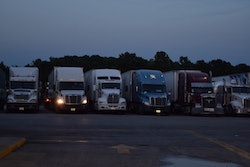