A bill filed in the U.S. House Thursday by Rep. Brian Babin (R-Texas) would allow drivers to take one break per day — of up to three hours — that does not count against their 14-hour on-duty allotment. The bill mirrors a petition filed by the Owner-Operator Independent Drivers Association last month with FMCSA, which calls for a pause button for drivers’ daily 14-hour clock of up to three hours and the removal of the mandatory 30-minute break required by current hours regs.

Babin’s bill is backed by the Owner-Operator Independent Drivers Association.

The bill’s filing comes as FMCSA is in the process of studying adding hours of service flexibility via split-sleeper berth options, but the research and regulatory process to institute such changes would likely take years, should the agency pursue it.

Last March, under a Congressional directive, FMCSA removed the requirement that drivers’ 34-hour restarts include two 1 a.m. to 5 a.m. periods, which is a core component of an hours of service overhaul instituted in July 2013. The mandatory 30-minute break was also added then. The 30-minute break remains in place, despite other portions of the rule being nixed by Congress. 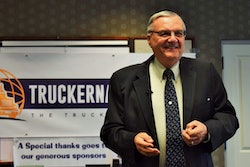