A firearms manufacturer out of South Carolina is petitioning the Federal Motor Carrier Safety Administration to allow its two commercial vehicle drivers to extend the operating radius of the short-haul hours of service exemption from 100 air miles to 150 air miles.

Palmetto State Armory says its drivers pick up and deliver products between manufacturing facilities and drive to PSA retail stores. The company states current operations include trips between 103 and 109 air miles.

The short-haul exemption requires drivers that drive beyond 100 air miles to keep a record of duty status for the days they exceed the mileage limit or utilize an electronic logging device if they exceed 100 air miles for eight days in a 30-day period.

PSA says using ELDs or keeping logs “adds substantial costs to its operation and does not increase the level of safety.” The company notes that its drivers average between eight and nine hours on-duty per day with just over three hours of actual driving time.

FMCSA is accepting comments on the request here through Dec. 16.

The company’s request is in line with FMCSA’s proposed hours of service changes, which would extend the short-haul exemption’s air mile radius from 100 to 150 air miles. The comment period on the proposed changes closed in October. 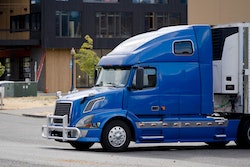