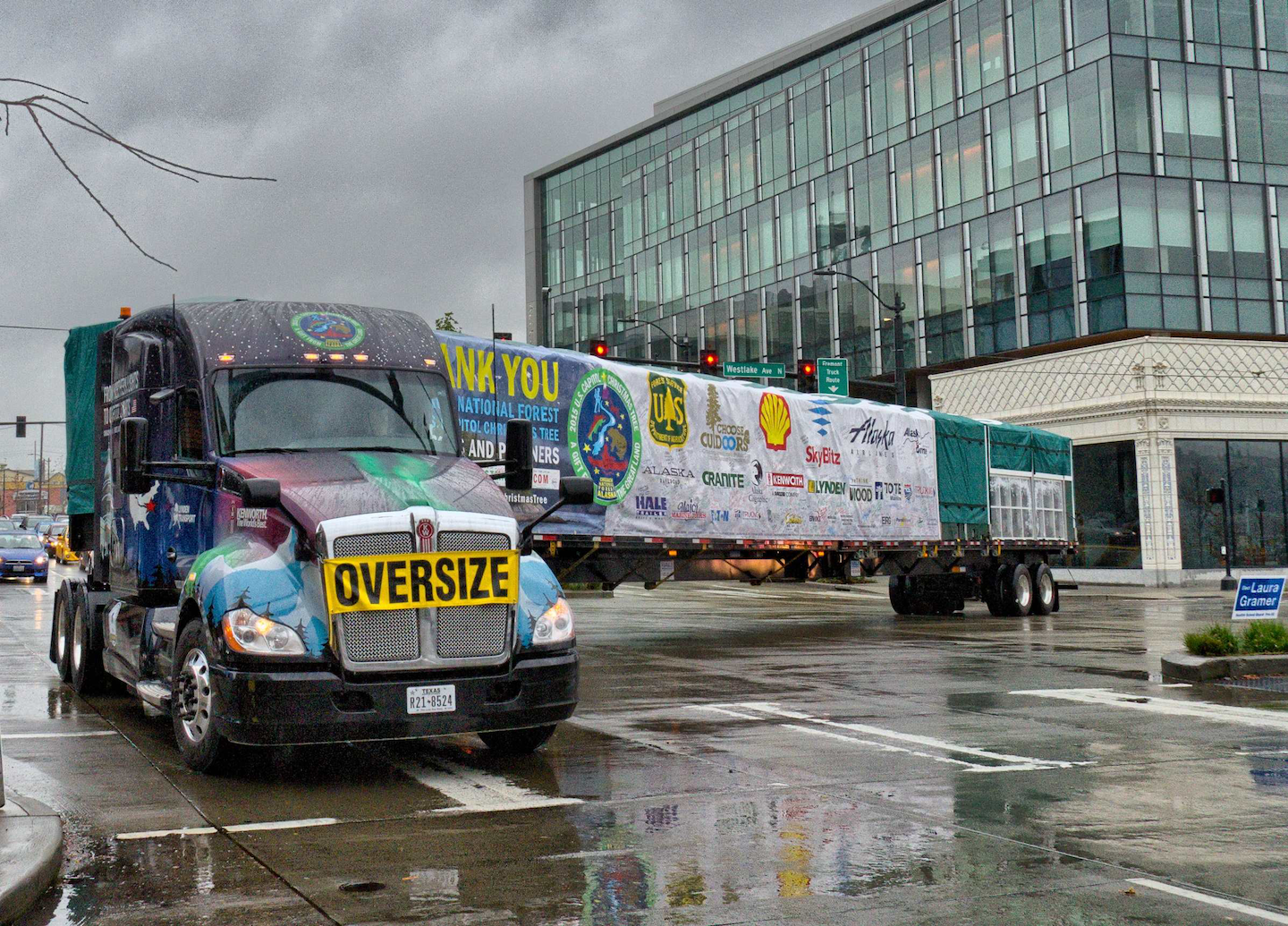 Lynden Transport driver John Schank makes a turn in the Belltown District of Seattle as it makes its way to Lake Union Park.

The 2015 U.S. Capitol Christmas Tree made its first tour stop in the lower 48 states Saturday, Nov. 7, with an event at Seattle’s Museum of History and Industry and Lake Union Park.

A crowd gathered to see the 74-foot Lutz spruce from Seward, Alaska, being delivered by a Kenworth T680 76-inch mid-roof sleeper tour truck with specialized trailer.

Throughout the tour, the truck will haul the tree 3,000 miles to different communities across the country en route from Seattle to Washington, D.C. The tree will be lit by newly-elected Speaker of the House Paul Ryan (R-Wisc.) on Wednesday, Dec. 2, outside the U.S. Capitol building.

“For the next few weeks, the Kenworth T680 with the 76-inch mid-roof sleeper serves as ‘America’s Truck’ as it transports ‘The People’s Tree’ across the country to Washington, D.C.,” said Kurt Swihart, Kenworth marketing director. “This new Kenworth configuration provides excellent fuel efficiency and driver comfort with inspirational graphics for those seeing the truck on the road or at the community events.”

Lynden Transport driver John Schank – who has logged more than 5 million miles on the Dalton Highway between Fairbanks and Prudhoe Bay, Alaska – has received the honor of serving as the tour driver for the U.S. Capitol Christmas Tree.

During the Seattle event, visitors signed banners on the sides of the trailer to wish the Tree well on its journey, explored the Chugach National Forest Service and Choose Outdoors exhibits, and listened to the Alaska bluegrass band Blackwater Railroad Company traveling with the tour.

Future stops on the tour include: 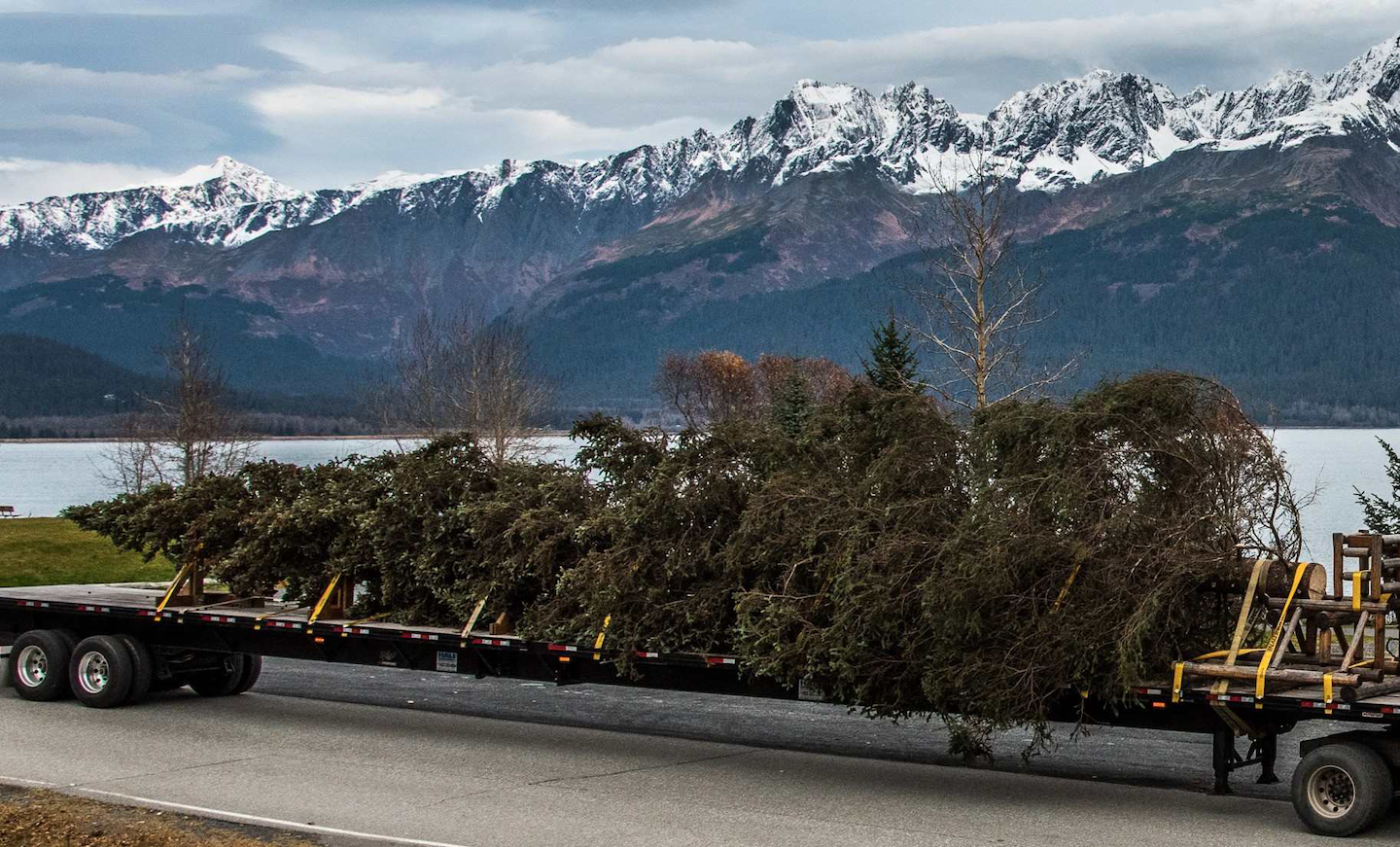 Lynden Transport moves the 74-foot Lutz spruce from the Chugach National Forest to a facility in nearby Seward, Alaska, to be wrapped for its 4,000-mile journey by ship and truck to the U.S. Capitol in Washington, D.C. Once the tree is wrapped, it will stay wrapped and inside the box until it gets to Joint Base Andrews in Maryland on Nov. 19. (Photo Credit Darrell Hicks / SkyBitz) 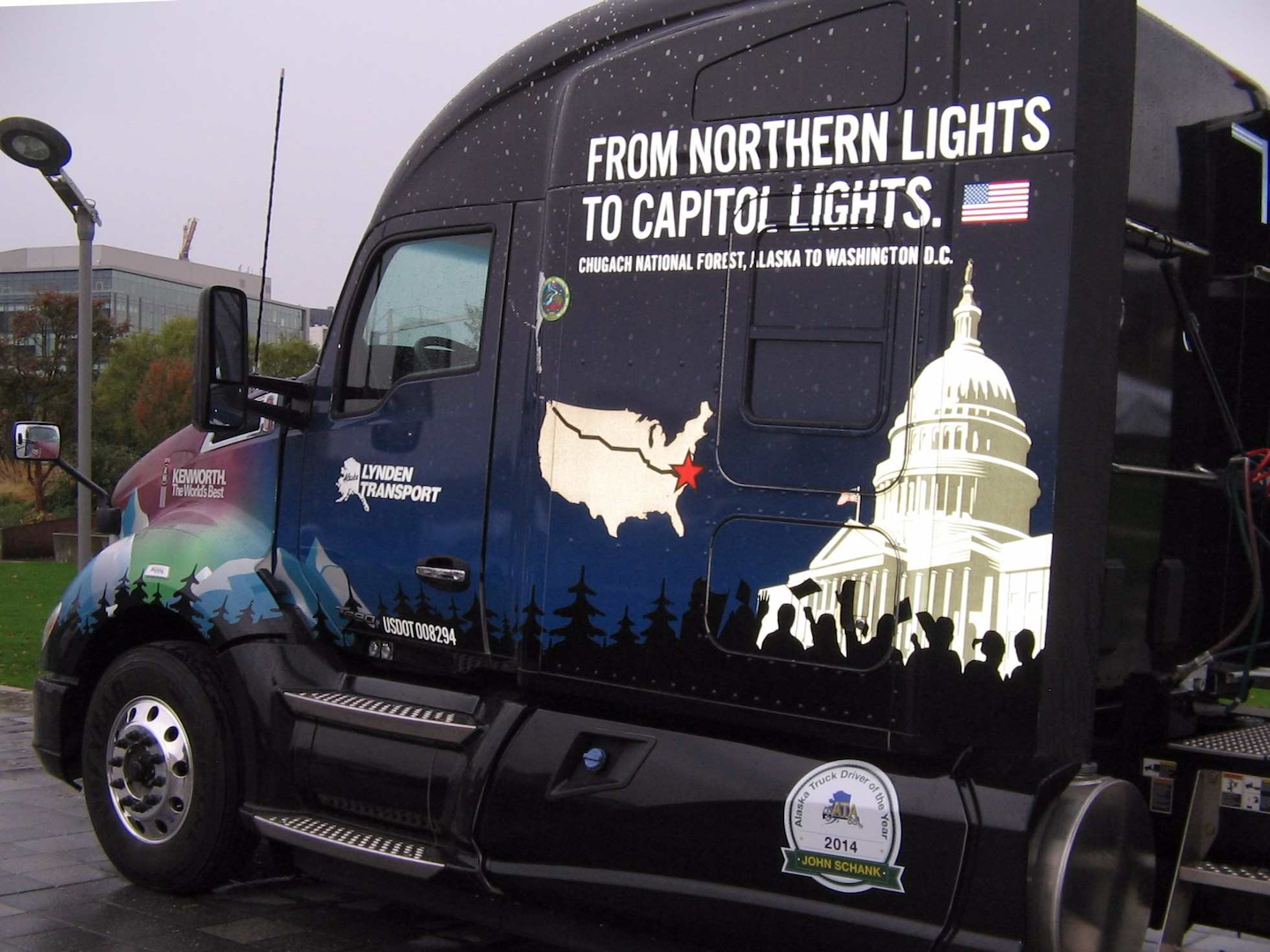 The Kenworth T680’s distinctive decal design features the Chugach Mountains and the U.S. Capitol beneath a northern starry sky with the words “From the Northern Lights to Capitol Lights.” It includes the 2015 Capitol Christmas Tree official seal, a map of the tour route across the United States, and the Alaska state logo of Lynden Transport, a long-time Kenworth customer based in Anchorage. 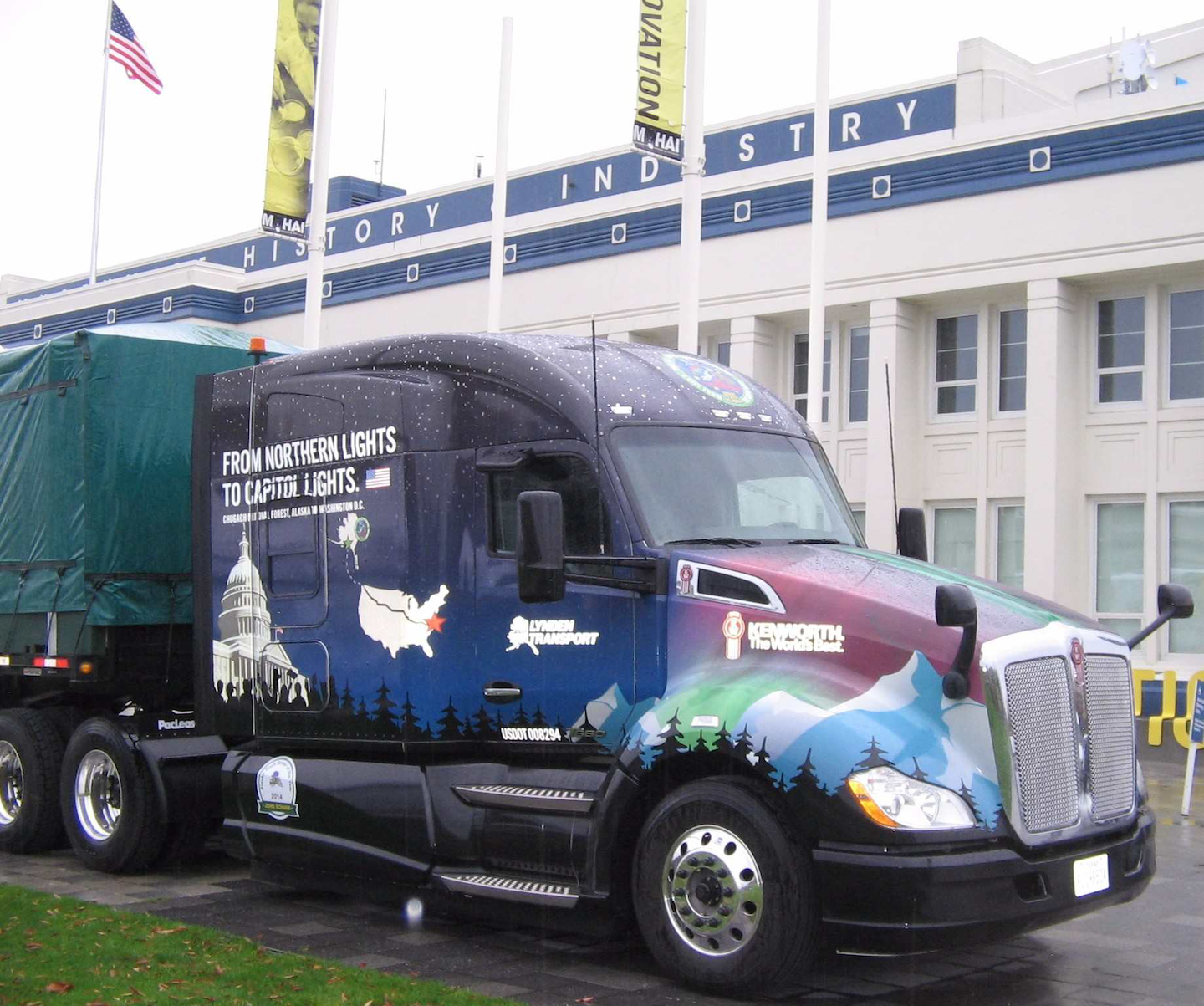 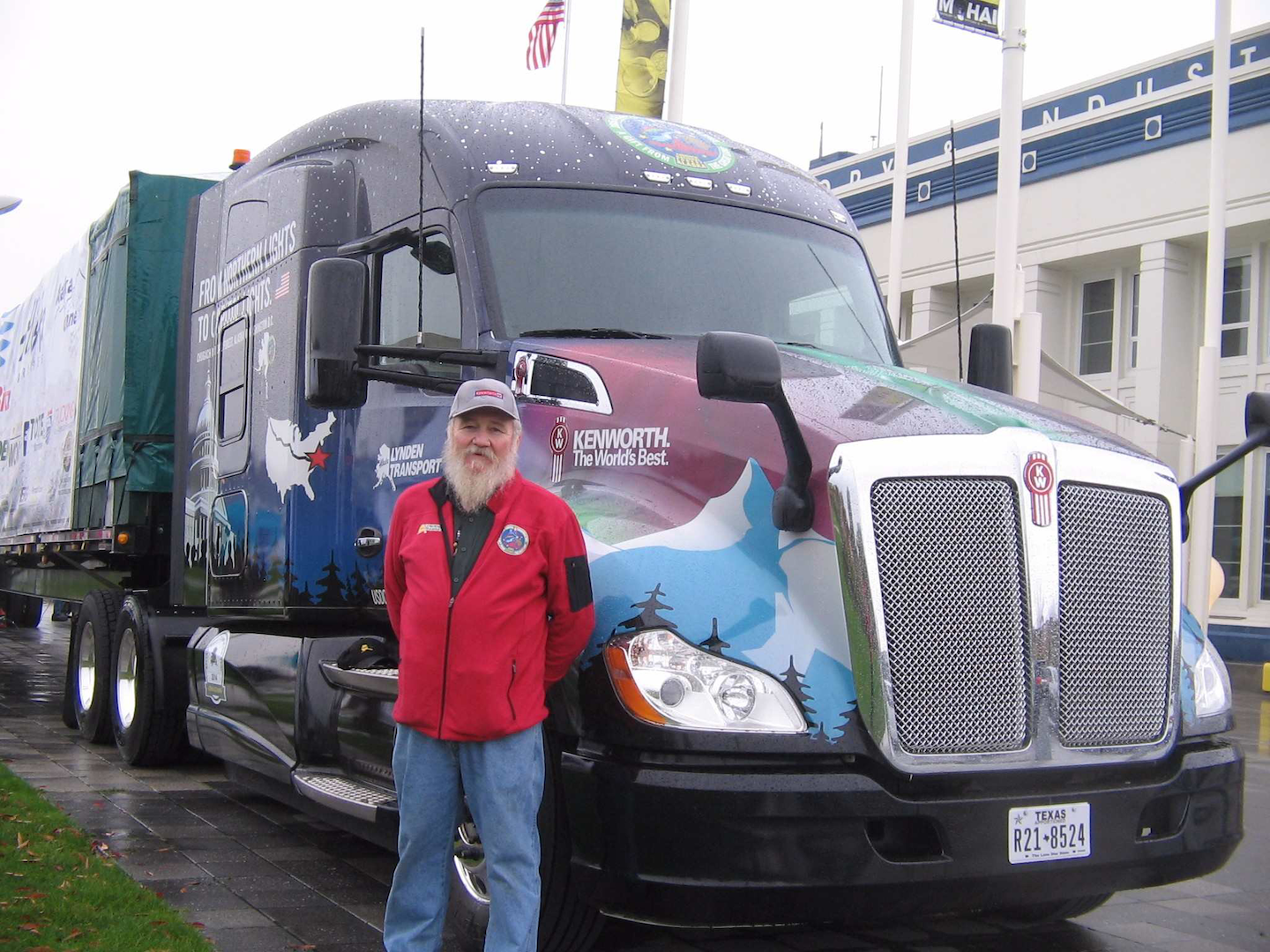 Lynden Transport driver John Schank – who has logged more than 5 million miles on the Dalton Highway between Fairbanks and Prudhoe Bay, Alaska – received the honor of serving as the tour driver for the U.S. Capitol Christmas Tree. 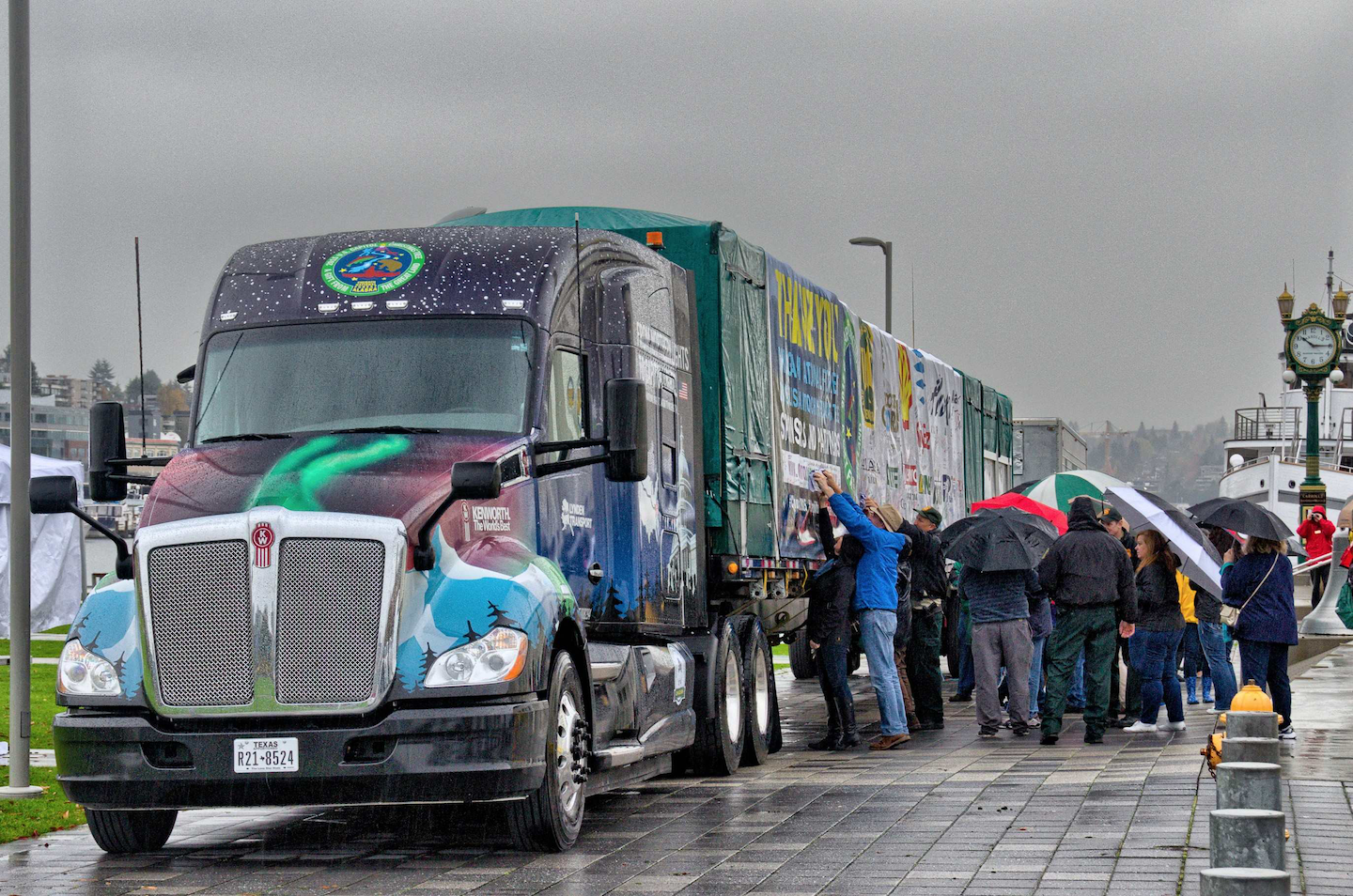 The U.S. Capitol Christmas Tree drew a crowd of visitors at Lake Union Park in Seattle as it made brief stop on its tour of the Lower 48 States to Washington, D.C. 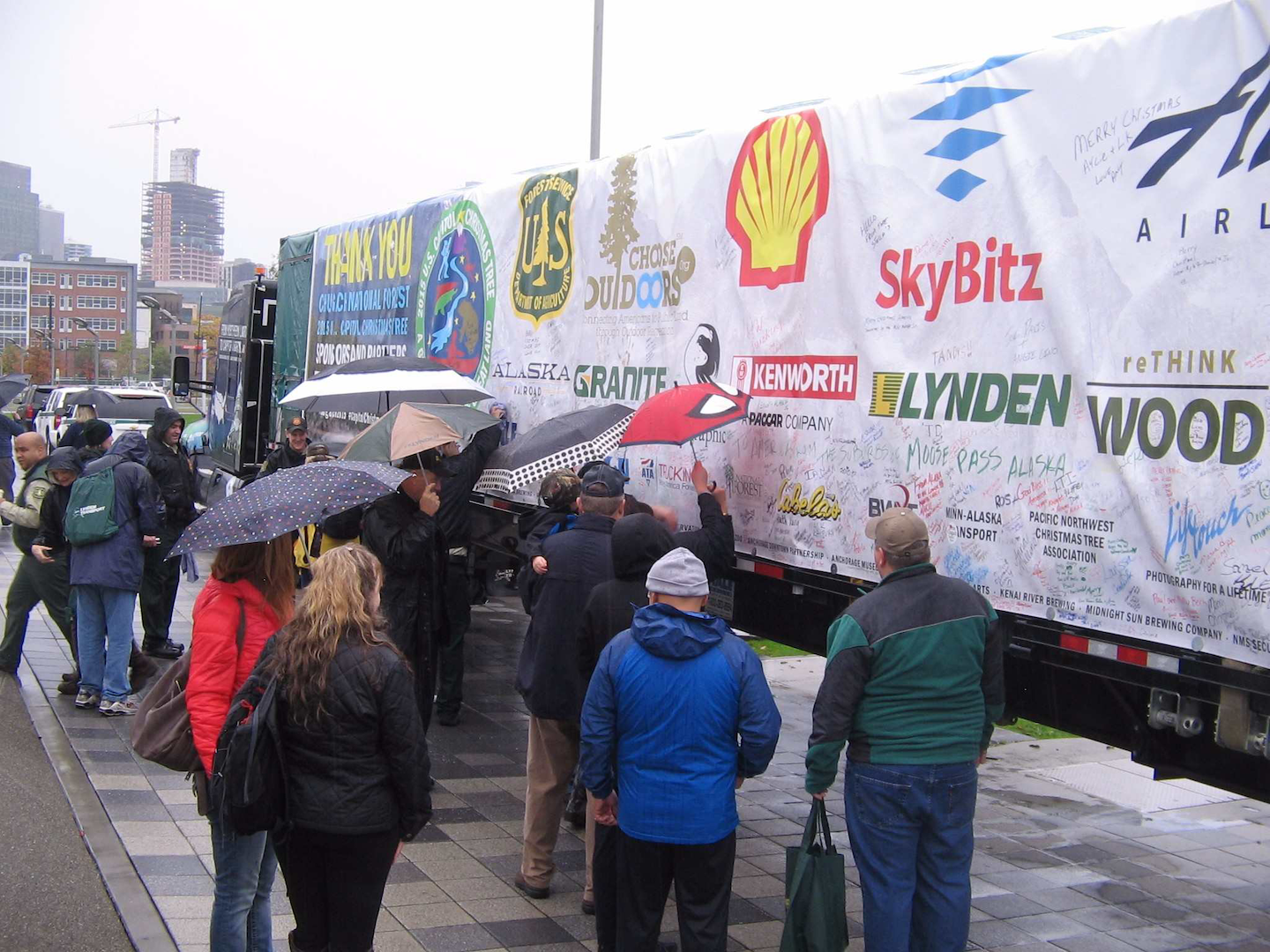 During the community event at Lake Union Park in Seattle, visitors sign banners on the sides of the trailer to wish the tree well on its journey. 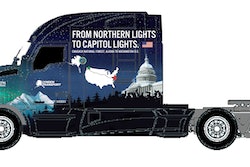