Authorities have arrested three men in connection with Monday's discovery of numerous bodies found in a tractor-trailer abandoned on a remote road in San Antonio, Texas.

Monday evening, authorities were alerted to an abandoned tractor-trailer and arrived to find 46 people deceased inside the trailer, along with 16 others who were sent to hospitals. The number of deaths has since risen to 53, as seven people who were found alive in the sweltering trailer have since died at area hospitals, according to reports.

The San Antonio Express-News reports that the suspected driver, Homero Zamorano, 45, was taken into custody in a field near where the tractor-trailer was abandoned. An unnamed police officer told the Express-News that Zamorano "was very high on meth when he was arrested" and had to be taken to the hospital.

Investigators reportedly also traced the truck's registration to a residence in San Antonio and detained two men from Mexico -- Juan Francisco D’Luna-Bilbao and Juan Claudio D’Luna-Mendez -- for possession of weapons.

Ashley C. Hoff, United States Attorney for the Western District of Texas, confirmed in a statement that the people in the trailer were apparent victims of human smuggling.

“San Antonio first responders and law enforcement discovered a tragic and disturbing scene [Monday] evening on the southwest side of San Antonio," Hoff said. "Dozens of immigrants were found dead or incapacitated in and around a tractor-trailer with over a dozen others hospitalized in critical condition. All were the apparent victims of human smugglers indifferent to the well-being of human life. The South Texas heat is brutal this time of year, especially given the recent record-high temperatures. We will continue to work with the Homeland Security Investigations and the local responders to identify and bring those who were responsible for this tragedy to justice.”

The Federal Motor Carrier Safety Administration announced it has renewed Prime Inc.’s exemption that allows drivers who have passed their CDL skills test but not yet returned home to obtain their CDL to drive in team operations.

The waiver still requires a CDL holder in the truck with the commercial learner’s permit holder, but not necessarily in the passenger seat while they are driving. The exemption is effective through June 27, 2027.

In its renewal request, Prime said it has not discovered any safety issues while operating under the exemption and that it will continue to monitor its safety data. The company added that its “lead seat” trainers are typically owner-operators and are therefore interested in ensuring that the CLP holder operates the truck safely. In addition, Prime said that once its CLP holders have passed the CDL skills test, they continue into their second phase of training, in which they typically log more than 30,000 miles before becoming a solo driver.

Bison Transport driver Kenichi Tanisaki, from Calgary, Alberta, Canada, has been named a Highway Angel the Truckload Carriers Association for getting his trainer help during her medical emergency while driving from California to Canada.

On the evening of May 26, 2021, he was driving on I-5 with his trainer, Julie. Tanisaki had only been driving for two months at the time.

The two were heading toward Langley, British Colombia, coming from California. Tanisaki noticed that Julie was in distress and not acting normally.

“She looked like she was sick,” he said. “I asked her if she was OK, but she said she was fine.”

He continued to be concerned because she looked like she was getting worse. “I asked her a couple of times if she wants me to call 911,” he said, “but she kept saying no.”

Tanisaki pondered what to do; he was in the U.S. still and wasn’t sure how insurance, payment, and family might play a role if Julie was hospitalized outside of Canada. Plus, she insisted he not call 911.

When they got close to the Canadian border, she woke up and seemed confused, didn’t know where she was, and was talking to herself.

“I realized that something was wrong, and I really had to take action,” Tanisaki said. “I decided to go back to my company yard and ask for help.”

At Tanisaki’s request, Bison Transport staff called an ambulance, and Julie received urgent medical attention. The paramedics told Julie that had she not gotten help, she most likely would have died within the hour. She was in a coma for seven weeks and had to have a kidney removed, which also left her other organs damaged.

Just recently, she returned to work and is very grateful to Tanisaki for saving her life.

“I am so happy that it was not too late to call the ambulance,” Tanisaki said. “Now she is recovered from her kidney infection -- I did not do anything special; I just did the right thing.” 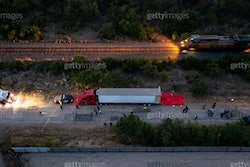 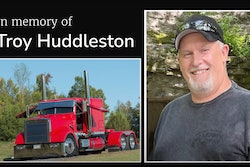 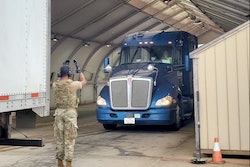 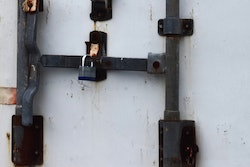