Yeehaw! The best and worst license plates and slogans

Perhaps all drivers share the same love of iconic independence that’s dear to many long-haul drivers. Well, that’s one conclusion you could draw from a survey that says motorists’ favorite license plate is Wyoming’s, with its silhouetted cowboy on a bucking bronco. 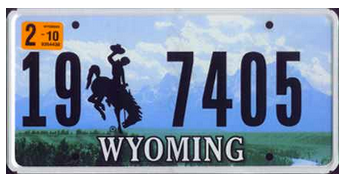 Men voted more strongly for this plate than women did.

Another explanation for the choice is that Wyoming’s and Oklahoma’s (showing a native American shooting at arrow) are the only current plates showing a person. As I learned long ago in the newspaper business, people like to look at images with people in them.

The survey was done by Carinsurance.com. Voting’s still going on, if you want to log in or just look at a collection of every state’s plate. Also, you can read the full survey results, including the lists.

One list ranks the least favorite plates. The dubious top honor there goes to Delaware, which has no image.

“License plates used to be a calling card for your home state,” said CarInsuance.com Managing Editor Des Toups. “The best ones still are.”

In fact, 13 percent of respondents said a plate had inspired a vacation or relocation, citing Florida most often. The other plates that successfully encouraged vacations or relocations were Georgia, California, Hawaii and Alaska.

Respondents also picked their favorite license plate slogans. As a resident of this state, I’m downright honored to know that we took the No. 1 sweet spot on this list. Here’s a clue: