Almost continuously for a decade, diesel has cost more than gasoline. Not a lot – generally well under a dollar a gallon, often under 50 cents – but that changed considerably in late 2014. Now that gasoline has plunged below $2 a gallon in some markets and diesel remains above $3, you might wonder why diesel prices haven’t fallen as fast.

One reason is that the global market for gasoline is more than twice that of diesel, so gasoline pricing is more competitive and quicker to respond to economic forces.

There are other factors, says Tom Kloza, global head of energy analysis for Oil Price Information Service, who adds that diesel prices should soon fall dramatically.

For the last 100 days of 2014, supply and demand put more pressure on diesel than gasoline. “It’s a product that affords refiners a little bit more profit,” Kloza says. “Gasoline is too easy to make these days,” thanks to an abundance of light crude shale oil, so the oversupply has helped push prices down.

Also, “One thing that’s really kept diesel prices quite high is we’ve got a booming agricultural business,” he says. “It was just a bumper crop harvest in the Midwest.”

Diesel demand is usually strong in winter because it competes with heating oil for how crude oil is refined. With a moderate winter this year (at least until this week), there has been less pressure to divert production to heating oil.

However, things are about to change for diesel, Kloza says. China and other countries that have built refineries in the last five years have designed them to maximize diesel production because of the good profit margin.

“Production of diesel worldwide is probably going to outpace demand growth in 2015,” Kloza says. “U.S. refiners made more diesel last week than they’ve ever made in the history of U.S. refining.”

The result is that diesel prices should fall “pretty precipitously” in the first half of 2015, he says. While gasoline might drop another 10 cents before bottoming out, he predicts diesel will drop another 40 to 50 cents. 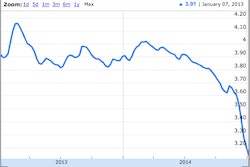 After latest drop, diesel could be one week away from falling below $3