We asked readers of Overdrive and sister brand Truckers News this year: What is the one thing you dislike most about your job today? The biggest problem is “Regulations make it harder to work and make a living.” It dwarfs the responses “It’s a thankless job – nobody respects truckers” and “I’m not making enough money.”

I was struck by the very low ranking of pay. It’s traditionally led such survey questions or at least come in close to responses such as needing more respect or more home time.

As Senior Editor Todd Dills recently reported, owner-operator net income has barely kept up with the rate of inflation over the last decade, and company driver pay has done worse. More recently, freight demand has been soft. Lengthy, unpaid detention continues to humiliate and rob many drivers. Too many drivers are in the industry by default or, put another way, only for the money.

So when nearly two-thirds of truckers (for owner-operators alone, 71 percent), working long hours for modest pay, are far more aggravated over regulations and lack of respect than they are money, something’s amiss. It’s no surprise that turnover stays high. It’s no surprise that the average age of drivers keeps rising when young adults learn what a trucking career is really like and say no thanks.

Perhaps more than the truck-trashing public, it’s regulators who need to give pause to National Truck Driver Appreciation Week, Sept. 11-17. They seem blind to the havoc they’ve wrought.

As Dills reports in the September Overdrive, the makeup of the Motor Carrier Safety Advisory Committee in just one decade has shifted significantly toward more truck safety advocates and fewer representatives working directly in trucking. That’s a good recipe for safety solutions that are dream world-high in expense, low in real-world testing and application.

The result: Truck drivers “have a crash rate that is 28 percent lower than other vehicles’ and the fatal crash rate has fallen 74 percent since 1973,” writes Burch, citing U.S. DOT stats.

Let’s hope that before it’s too late, the regulatory machine finds effective ways to improve those rates without continuing to “make it harder to work and make a living.” It hurts safety and productivity when you push too many good drivers and promising rookies to give up on a trucking career. 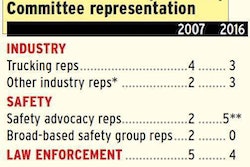