Based on two Overdrive pre-election polls, three out of four owner-operators voted for President-elect Donald Trump. No doubt one reason is that, in solidarity with Trump’s Rust Belt supporters, they want good jobs to stay in or return to America.

In the Nov. 21 video outline of his first-100-days plan, Trump seemed less strident on the isolationism and nativism that appealed to so many voters. He said the U.S. will withdraw from negotiations on the Trans-Pacific Partnership, replacing it with “fair bilateral trade deals.” After campaigning that he would scrap the North American Free Trade Agreement if he couldn’t do a major renegotiation of it, he simply omitted NAFTA in his outline.

Do trade agreements that reduce or eliminate most tariffs really hurt our economy? A 2012 University of Chicago Booth School of Business survey asked economists of widely different leanings if Americans were better off because of NAFTA. Yes, said 95 percent of respondents. Only 5 percent were unsure. No one said no.

Their reasoning is pretty simple: Lower tariffs under NAFTA allow us to buy and sell more goods. More importantly for trucking, trade in either direction means freight.

Over those 15 years, jobs have disappeared for other reasons, too: automation, the weakening of unions, and an educational system that fails in workplace training. But as for the net effect of NAFTA, it’s not the principal culprit.

U.S. interests are integrated with Mexico and other countries in ways that aren’t as visibly newsworthy as a shuttered factory. Almost 40 percent of what we import from Mexico originates from U.S. sources, wrote Walter Kemmsies, who at the time was chief economist at the Moffatt Nichol consultancy, in a 2014 article. He estimated that figure was less than 5 percent 20 years earlier. “A lot of jobs were created in the U.S. that wouldn’t be there without the Mexico trade,” says Wharton School of Finance professor Mauro Guillen.

Following its pilot program for cross-border trucking, the Federal Motor Carrier Safety Administration two years ago began accepting applications from Mexico-based haulers for operating authority, and now Mexican carriers are allowed to lease equipment to U.S. entities. Many U.S. truckers have feared the impending hordes of reckless Mexican drivers and the loss of U.S. driving jobs.

So far, such concern appears overblown and misplaced. You could say the same for Trump’s rhetoric about isolating us from trading partners who have helped fuel America’s economic engines, including the trucking industry. 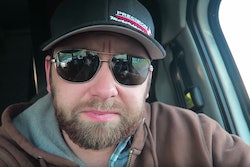