Post-ELD mandate crash data a knock on hours regs, too

There’s no doubt the conclusions made by a recent research report on crash statistics since the ELD mandate could prompt a head nod or two from owner-operators and, likely, will inflame already existing animus against the forced adoption of electronic logging devices by Congress and the U.S. DOT.

The study is one of the first analyses the industry has had when it comes to crash statistics since the mandate took effect. In short, it concluded that, according to raw crash data, there’s been no obvious drop in truck-involved crashes (based simply on a weekly average count) since enforcement of the mandate began in earnest last April. That’s despite the fact that hours of service compliance has demonstrably increased — a conclusion the researchers based on a pronounced drop in hours of service violations.

The research lands just as FMCSA is prepping to propose a rule to potentially change hours of service regulations, which has been predicted to be published in the coming months. Researcher Alex Scott, a professor of supply chain management at Northeastern University, said he and his colleagues were focused solely on ELDs for the project, not the broader implications of hours of service compliance. He co-authored the study with peers Jason Miller of Michigan State and Andrew Balthrop of the University of Arkansas.

“There’s been many, many stories written and anecdotes about the impacts of the ELD mandate and disliking ELDs and so on,” says Scott. “But we think it’s valuable to approach things with an empirical and data-driven mindset. I guess we kind of got jaded with anecdotes. It’s nice to have data.”

I was able to speak with Scott on Tuesday, the day after Overdrive wrote about the findings via the story at this link. He confirmed the research was conducted independently and for research purposes only, meaning they weren’t contracted to perform the study by any government agency or private association. General curiosity led them to study the mandate’s possible effect on crashes, said Scott, who worked as an engineer for J.B. Hunt before moving into academia.

Whether drawing conclusions about ELDs or hours of service, he says, their goal was to “get the conversation moving forward using hard data.”

“If FMCSA came forward with data that refutes what we found, then great,” he says. “In the sense that we moved the conversation forward with them having to provide analysis on hard data.”

An FMCSA spokesperson on Thursday said the agency is still reviewing the study’s data sources, findings and methodology and, thus, couldn’t provide comment on its conclusions.

Notably, researchers did not account for any rise or fall in vehicle miles traveled, one of the biggest leader of rises and falls in crash counts. However, Scott said that by comparing carriers of various sizes (such as comparing small carriers to large carriers) they attempted to account for variability in freight volume, mileage and other potential variables. “There are multiple ways in the analysis that we do control for” miles driven, said Scott. “It’s hard to conclude that this is just a pure miles-driven factor.”

Andrea Marks, spokesperson for the upstart group TruckerNation (who with so many truckers and other groups helped prompt FMCSA’s decision to evaluate hours of service regs) said the study’s conclusions reveal that the ELD mandate “has been an exploitation of flawed hours of service” regulations.

TruckerNation has been a strong advocate of allowing drivers to split their on- and off-duty time into segments, rather than working against the straight 14-hour clock.

“The agency has a very limited view of the success of the mandate,” says Marks. “The success for them up to now has been rooted in the fact that hours of service violations are going down and that they’re seeing in the mid- to high-90s percentage wise of compliance with the mandate. However, that limited view of just compliance with the mandate and reduced hours of service violations doesn’t speak to the bigger picture of how all of this is really impacting safety.”

A spokesperson for the Owner-Operator Independent Drivers Association on Wednesday said OOIDA is “not surprised” by the study’s conclusions, but that it “views the study’s findings as preliminary, noting that it will take more months of data collection to reach a complete conclusion,” adding that “we agree with the study’s focus on reportable crashes and not just compliance with hours of service regulations.”

An alternative take on speeding violations

Another noteworthy conclusion reached by Scott and his team were that, since the mandate took effect, the number of unsafe driving violations, particularly for speeding, has increased, especially among independent owner-operators and small carriers.

However, Steve Bryan, CEO of data firm Vigillo, says he hasn’t seen that trend in the data he’s analyzed since the mandate took effect. In fact, he says, he’s seen the opposite trend — speeding violations have gone down. “And it’s dramatic,” he said.

He says he’s not disputing the researchers findings on crashes, but the points about an uptick in speeding violations “doesn’t give us a fair look at what this industry has done since the ELD mandate” took effect, he says.

Bryan says he’s also heard anecdotal evidence backing up that conclusion in conversations with fleet managers. He attributes the decrease in speeding violations he’s seen to broader use of telematics systems, which carriers often adopt as part of their ELD systems and which measure a truck’s speed and can often communicate that speed with back-office parties. With carriers having greater access to drivers’ speed data, drivers tend to slow down, he says. 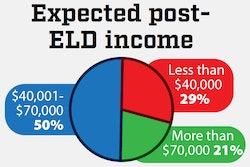