Find more from “Long Haul Paul” Marhoefer and his “Faces of the Road” series via this link.

“I was in the Army National Guard for Eight Years.  I was too young for Korea, and too old for Vietnam.  Never felt like I even served. I never got sent anywhere.

“My grandad was a steamboat engineer. He worked on the Ohio and the Mississippi . At 80 he became a merchant marine  so he could run the diesel engines. He loved it. He said, ‘We’ll be the first to go if there’s a war.’ You could just see the Indian in him. Chewed Red Man every day of his life. He worked until the day he died. He was  83 and his hair was still jet black.

“I started hauling produce out of Florida in ’57. Back then there were no reefers. We had bunkers and blowers. Twenty five pounds of ice and a Briggs and Stratton. Back then, two-thirds of the truck stops had ice. They’d either blow the chopped ice on top of the load, like if you had cabbage, or you’d get a block of it through the side door in the nose. It was the worst thing, getting those Briggs and Strattons started in the Winter. They were pull start motors. It took $90 to pay for the ice, but the shippers paid that. You got 25 percent of the load to go from Evansville to Florida and back. Fuel was just 19 cents a gallon. You could make a hundred to a hundred-fifty a week.

“I got aggravated when they went to the reefer [motors]. They would buy the ice, but they wouldn’t buy your fuel for the reefer. In ’62, I started with R.L. Jeffries — machinery, heavy haul. Had my own truck for a while. Got married in ’64. She had four kids. I raised them as my own. We were married 42 years til she passed. [Now] I’m not looking for a woman, and there’s no woman looking for me.

“I never liked to stay at an outfit too long. I’d work a year, maybe two. I stayed at Toyota out of Princeton [Indiana] once for ten years. What was that reefer outfit out of Cape Girardeau that went belly up?”

“Yeah, Sam Tanksley. I was coming down that mountain out there by Portland [Oregon] and could barely hold their truck on the road, the front end was wobbling so bad. I put it in the shop when I got back. Next day the boss called and said, ‘You know you almost killed my mechanic? He was test-driving your truck and wrecked, the front end was so bad.’ I got out of there. Not long after that, they closed.” 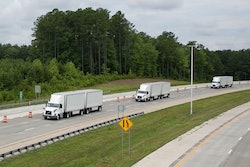