“I grew up in Harlan County. My dad was from Southern Alabama, [but] Mom was from Harlan. Born on Ages Creek. Dad met Mom in Chicago. He was driving for Canada Dry. I think Mom waitressed. Neither liked living in Chicago. [When] I was a year old, there was openings in the mines. [So] I grew up in a coal camp — Coxton, Kentucky.”

LHP: “Do you remember any conversations with your dad about how he decided to move to Harlan County?”

Mike: “He wasn’t used to the accent or terms used in the coal mines. And he started just after the labor strikes in the ’70s when it got bloody. When he first started, he overheard a conversation between two miners…. He heard one ask the other, ‘How many gons we got today?’ And the man replied, ‘About 70.’ Dad got nervous, thinking they were going to start a war. [But] a gon is a coal gon [or gondola, which is a] train car used to haul coal. This was all foreign to Dad.

“When I was 14, I saw my first electric guitar. It was an Aria Pro II. It had wood grain and gold tuning pegs. I thought it was the most beautiful thing I’d ever seen. I went home and asked my dad if he’d get it for me. He said, ‘Son, you don’t even know how to play a guitar.’ I said, ‘If you get it for me, I promise I’ll learn.’ He didn’t have any money, so he traded the man his 12-gauge shotgun so I could have that guitar. It was electric, and I had no amp for six months, but I learned three chords. I wrote my first song, ‘Taking the Fifth,’ by the time I was 16. I used to go around town and play it for people.

“I didn’t finish high school. When it came time to go to work, I became a coal miner. I was a Wilcox miner. I set jacks. You crawled on your belly most of the day (in an area) that was only 23 inches high. We used to ride out [of the mine] on a conveyor. You’d lay on your belly. You’d throw a hundred pound bag of rock dust on there to make sure you rode low enough.  One day I rode on the belt where it had been spliced. It was a bad splice. It cut me badly in the groin area. I thought I was going to die. My pants were covered in blood. I went to show my supervisor that I’d been hurt. He looked at me and said, ‘You get your period?’ I never went back to that mine. I joined the Army a short time later.

“When I got out of the Army, I became a laborer on a construction crew. When they fired the safety man, I told my boss, ‘I’d sure like that safety job.’ A couple weeks later they gave me a company truck and a fuel card. We worked Alabama, Kentucky, Wisconsin. You were always moving, finding a new apartment. I finally wound up in Wisconsin for 12 years. I’ve got two kids up there. A buddy of mine was going to truck driving school in Racine. I decided to give it a try.

“My first job was with Outlook Trucking. We used to be called ‘Look Out’ on the CB. They literally threw me the keys to an old Pete cabover and told me to be in Tennessee in the morning. Going through Chicago, I was scared to death. I figured the only way I was going to survive was to drive as crazy as all these other fools.”

I asked Sheffield just where all the self-penned songs on his new album, “Hammer Down Again,” came from. Like other trucker artists, many of Sheffield’s earliest songs were first riffed out over the CB.

“Well, a lot of these songs have evolved over the course of 10 years. I used to be the CB king.  When I used to go through Chicago, I had a thing I would say …”

This channel 19 refrain would eventually become the nucleus of the outlaw anthem “Truck Driving Fool,” Sheffield’s first single. The song would garner the attention of a young producer in Virginia.

With lead and steel guitars covered by Steven Blevins, drums by Chris DeWitt, and bass, vocals and rhythm guitar supplied by young producer Zach Burnette, what ensues is a gorgeously produced collection of 11 songs that effectively showcase Sheffield’s lyrical prowess. It rivals anything this gearjammer has heard from the current crop of trucking musicians. Sheffield’s road-weary and tobacco-cured vocals growl the lyrics with such conviction you can almost smell the coal smoke coming from the chimney of his Coxton, Kentucky, homeplace.

For my money, though, the jewel of the collection is “Two Sticks and Toothpicks,” a song inspired by an encounter Sheffield had with an octogenarian trucker at a West Texas cafe.

“He had an old 1982 (Peterbilt) 359, and we were swapping stories. I told him about the time I went to Canada when the salmon were running, and I could literally reach down and catch fish with my bare hands. He said, ‘Well, son, I been to Mexico three times and never caught nothin’. So he topped me there.”

The chorus resonates with anyone who feels that the changes in this industry have simply passed him by:

Two sticks and toothpicks
Is all he’s ever known
Since the day that he turned 24.
Now his wife has passed on.
His kids are all gone.
They don’t come around much anymore;
And he feels like a dinosaur.

Thunder Monkey credits the project coming together to a series of “happy accidents.” There was the video he made of “Truck Drivin’ Fool” with his wife’s nephew, Dustin Middleton, on a bourbon-soaked Harlan County night. Producer Burnette eventually saw that video and extended Sheffield an invitation to come to Virginia and record. Then there was the patient guidance of his wife, Earlene, who encouraged Sheffield to capitalize the project with pre-orders. The gritty realism of his songs had already attracted enough of a following that he was able to finance the project with those funds. Sheffield credits everything he’s accomplished to Earlene.

“She’s the one who got me over my fear of putting myself out there.”

Last week was a bittersweet one for Thunder Monkey. Unable to visit the nursing home where his ailing father resided due to the pandemic, he had so wanted to personally present “Hammer Down Again” to the man who traded off his shotgun all those years ago so that his son might play the guitar.

Due to recent changes in policy at the home, though, his brother John was allowed in.

“He got a quick test for COVID at the nursing home. He played the CD for my dad. I was sitting in Muskegon, Michigan, watching in on FaceTime. [He had] a huge smile, and he said he loved it.”

“Hammer Down Again ” can be streamed or downloaded at most online retailers. A physical copy can be obtained by messaging Mike Sheffield Music on Facebook.

Access all of Paul Marhoefer’s “Faces of the Road” series of profiles and oral histories via this link. 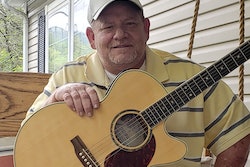 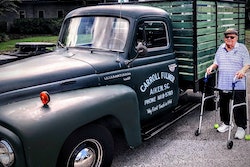 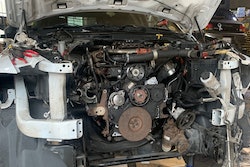