‘Life Is Short: Enjoy the Ride!’ A tribute to a father who did

Anthony Townley Jr. didn't expect his father to die young. So Anthony Jr. certainly hadn’t foreseen that one day he would be stuck halfway across the world, unable to fly home for a funeral because a military coup made air travel difficult.

“I was able to catch it online, though, and be part of a livestream of it,” said Townley, who, with his wife Sophia Townley, is a missionary in Myanmar. Townley sent Overdrive a letter recalling the impact of his father's life and what he'd learned from him.

“He was really excited about it,” said Anthony Jr. “He was going to buy a truck and be an owner-operator, but he passed away right before he was able to do so.”

Anthony Jr. remembers how his father loved trucking's travel opportunities. “He would always say, ‘I don’t see how people can stay in one spot their whole life. This country’s so big and beautiful.’”

Anthony Sr. spent as much time as possible at home to help raise Anthony Jr., now 25, an older sister and a younger brother. Once they were adults, he felt less need to run as many miles as possible. He also saw no need to minimize downtime on the road, and he found that running with an electronic logging device effectively forced more downtime away from home anyway. So he often hailed an Uber driver to get away from a truck stop and sample special local restaurants and attractions.

Talk of trucking permeated Anthony Sr.’s funeral, said his son. “Even his memorial table had little trucks on it.”

Not only did he miss attending his father’s funeral, but he’s missed out on some of his missionary activities over the last year. Because of COVID-19 concerns, “Churches have been closed for one year. On top of that, the coup makes everything double-closed. Stray bullets could come your way if you’re not careful.” At least 56 people have been killed as the military has cracked down on protesters since the Feb. 1 coup.

Townley has been in Myanmar for three years and expects to stay about a year longer. He’s based in the nation’s biggest city, Yangon, which was the capital until the military designated another city. Myanmar is located between India and China.

Here is the piece Townley wrote about his father:

Life Is Short: Enjoy the Ride!

Sometimes while we’re driving down the interstate we should just absorb the beauty God has to offer us. That’s exactly what my dad did while he was driving. Anthony Scott Townley Sr. was a trucker for close to 25 years and I’ll tell you something: He knew America’s roads better than any politician in office right now.

He started his trucking career with just a Peterbilt and a map. Yes, a map. Some of you remember those days, and might even have a map in your cab right now.

My dad started trucking in an age where there were next to no regulations, too. He saw the “black dog” plenty of times just so we kids would have everything we needed. He drove in the age of running and gunning, now most drivers spend a lot of time waiting due to ELD rules.

Some drivers see this as an inconvenience, but my dad used the extra time sitting to explore the places he passed by so many times. He no longer limited himself to just truck stop food but would go tear up a slab of ribs in the best barbecue joint in the town where he had an eight-hour rest.

In my dad’s later years, he started to enjoy the ride by venturing outside of his cab. He made plenty of visits to places like the 911 Memorial Museum, the Effingham Cross, beaches, and other places he failed to visit in his early years due to the constant miles he was running.

My dad’s Facebook page consisted of pictures from all over the country. If you didn’t know him, you would probably think, “This guy is on vacation a lot,” and he was. If you’re doing what you love, you are on a vacation. Yes, he would like to be back home with his family, but at the same time, we all grew up, and he knew that, so he took the extra time to see the places he never got to see while raising a family.

My dad never got to retire from the trucking industry, like so many others have. On Feb. 13 he passed away in his cab due to an enlarged heart at the age of 49. Sadly, most statistics show the average lifespan of a truck driver is 61 years.

I keep thinking about all the lives my dad touched by delivering goods. Whether it was food, hospital supplies, oil or gas, my dad hauled it all. His life made a difference in this world, and it’s not just him but the many truck drivers who have decided that the road is their home. As maps change to GPS and the CB era fades away, one thing will not: The determination of truck drivers to provide for their families and keep America running.

My friends, life is short. Enjoy the ride! 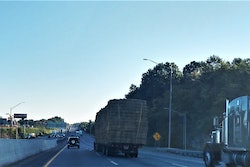