It’s not every day that we trucking editors get a private lunchtime concert, but such was the case Friday here at the offices of Overdrive and Truckers News. Former trucker Bill Homans, who records and tours as Watermelon Slim, had an evening set scheduled in downtown Tuscaloosa. He got to town early enough to treat us to a solo performance.

Slim can coax more slide blues sounds than I thought existed from his dobro guitar, which he plays lap-style, lefthanded and backwards. Add his authentic Mississippi Delta growl, coming from a road-worn face that makes Keith Richards look pretty, and you’ve got one fine performance.

Slim’s driving days date to 1969, when he was trained to drive in the military. He’s been in and out of the industry since, giving up trucking for good in 2004. But he and his dog are still doing a lot of driving on his “No Paid Holidays” tour that started this month, roams the nation through May, then moves overseas and to Canada for June through September.

Check here for his schedule and to view his website. If you’re planning to go to the Mid-America Trucking Show and can get to Louisville, Ky., a few days early, you can catch him Tuesday, March 23, at Stevie Ray’s.

Slim’s performing solo on his early dates, but most others are with his band, Watermelon Slim and the Workers, which has a more mainstream, country-blues sound. They’ve got a new album, “Escape from the Chicken Coop,” packed with great songs about trucking or the road. Here’s one to sample, “Caterpillar Whine.” 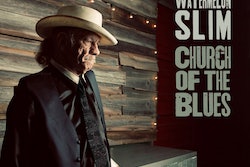 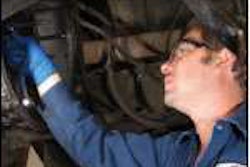