I don’t think I’ve ever seen quite as large a crowd in the seminar room at the Mid-American Trucking Show before — a standing-room-only crowd packed in B104 in the South Wing yesterday to hear FMCSA transportation specialists LaTonya Mimms and Danielle Smith run through the ELD mandate’s “Phase II,” they said. Essentially, they meant, where rule meets the road come December when the mandate’s enforcement date hits.

While questions around the enforcement environment post-ELD remain, the presentation does a fairly good job of detailing how elements of the rule will translate into real-world use of the devices and who’s responsible for edits, among other things. Hear it at the top of the playlist above, or embedded at bottom.

Opposition to the mandate continues with individual efforts around the nation, coordinated in some instances by OOIDA, noted association Executive Vice President Todd Spencer and owner-operator Monte Wiederhold. Wiederhold operates out of Lebanon, Ohio, and was part of, for instance, the meeting with Ohio rep Jim Jordan that I wrote about two weeks back. OOIDA is launching its “Knock Out Bad Regs” campaign to spur action among membership at the show and, Spencer noted, awaits word on whether the Supreme Court will take the association’s appeal of its case against the ELD mandate. More from them on the blog this week.

Time is short, however, and FMCSA presses on with ELD implementation. For our April issue, we’ve put together a guide to the relatively simple technology that is coming to market for compliance with the mandate, with untold dozens of providers now offering something. The good news is that pricing is coming way down. The bad: There’s a lot to that, of course, but chiefly it’s something that will more closely enforce an hours of service rule many owner-operators know is flawed, “bigly.”

TBS Factoring Marketing Director Genie Wood looked around at all the providers, likewise those in the so-called “uberization of trucking” space at the Mid-America Trucking Show, and during my conversation with her yesterday coined a little phrase I don’t think I’ve heard — “transportation tech bubble.” Apt? Likely.

Wood and company are on hand in the West Wing, their booth a relaxation station with massage chairs and the like, in part delivering a soft-launch of a new brokerage that TBS President Jennifer Fogg told me about a few months back. Before she came to TBS, Fogg navigated the FEMA contract process and is doing the same with the new Foxhole Logistics brokerage, part of TBS’ growing business units, which already includes the Elite Dispatch Service for owner-operators.

In any case, thanks to Wood for the apt phrase. How are you navigating the tech bubble? 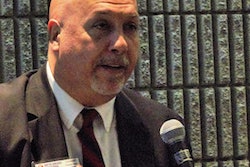