Two trucking and law enforcement panelists shared loads of mutual respect during a Thursday webinar on DataQs, but the fleet executive, Chris Haney, left no doubt about concerns shared by many in trucking over the seriousness of “unintended consequences” when the reviews process comes up short.

Haney, safety director for the 130-truck Payne Trucking, and Chris Turner, of the Commercial Vehicle Safety Alliance, were joined by moderator Todd Dills, Overdrive senior editor. The live-streamed session followed from Overdrive's recent "Setting the Record Straight" series, which details the often painstaking process of challenging and correcting even simple errors on carriers' records of inspections and accidents.

Underscoring the importance of the data made public under the Compliance, Safety, Accountability (CSA) program, which DataQs is used to correct, Haney pointed to a piece of information that is outside the bounds of the DataQ program, and so it's not contestable even when it's in error. Haney noted the accident record that is made public always discloses whether the truck's driver was cited or not, yet it doesn't specify the citation or other details.

As people involved in trucking, “we understand and know what that means, but my insurance company doesn’t, the plaintiff’s attorney doesn’t,” he said. “What about the customers I’m losing that see it, that don’t reach out for an explanation, and say, ‘No, I don’t want to deal with these guys.' We’ve been tried and convicted without even a voice to offer our objection. When this is made public, you’re inviting a wide  variety of interpretation.”

Turner agreed that DataQs needs improvement, and said CVSA is working with the Federal Motor Carrier Safety Administration and industry stakeholders to do that. FMCSA last year rejected CVSA’s initial proposal to test an appeals process at a national level that involves both enforcement and industry representatives, but asked the enforcement coalition to continue exploring how to improve the system.

“Our goal is to establish a panel at a national level,” Turner said. It will likely begin with a pilot program using two or three states, and will focus on DataQs that were rejected, then appealed and lost, and then are appealed yet again.

CVSA might propose a seven-person review panel composed of four law enforcement personnel, a carrier executive, a driver and a representative of a trucking trade association. Using such a panel is seen by Haney and many others, as Overdrive has reported, as a big potential improvement over the current system in which, too often, DataQs appeals are stonewalled and may even be reviewed numerous times only by the officer who wrote the violation or handled the crash to begin with.

Another issue Haney and Turner discussed was the FMCSA's fairly new Crash Preventability Determination Program, administered through the DataQs system for the initial requests for preventability determinations. When accidents are deemed non-preventable or preventable, they end up labeled as such in the public record associated with a carrier and driver.

With a preventable label, “there are issues with that because it’s not being adjudicated, it’s just being reviewed,” Haney said. To outside parties, preventable is too often considered the same as the driver and the carrier being “at fault,” though that’s not necessarily the case.

“Which is one of the main things I’m so vocal on – and that’s the unintended consequences of the program” and, more broadly, so much carrier accident and inspection data being made available to the general public, Haney said. “It’s available to people and parties that don’t understand what it is. They take it at face value. That creates a huge problem for us.”

DataQs and the broader CSA program are clearly needed because “there are bad actors out there,” Haney said. “But we’re not happy about it being public prior to any opportunity to be able to challenge the information.”

For that reason, it’s advisable for fleets to employ the DataQs system as quickly as possible. Turner said that often starts with requesting a copy of the accident report from enforcement, or in the case of an inspection, getting a copy from the driver.

“Most states have a 10-day requirement to get the first draft, I’ll call it, of an accident report in,” he said. If a DataQs review request results in a change is made, conversely, there’s often a delay of 30 to 60 days before “it’s even removed from a carrier’s profile.”

Turner offered other DataQs best practices to speed up the process and to be successful in a system that often rejects the reviews:

•     Drivers do best not to argue with officers at roadside, but to engage them in “a respectful conversation” and learn more of their perspective on the accident or the regulation underpinning a violation. “I would encourage the driver to ask the officer, ‘Hey, can you show me what you’re talking about?’” In his days patrolling the highways with the Kansas Highway Patrol, drivers would do that, and sometimes he would even print out a regulation to help them.

•      Drivers should “document the violation they’re showing with a camera,” he said. “Try to get the officer or the car in the picture” to help validate that the photo was indeed taken at the scene.

•      When filing a DataQ, “make sure that you’re concise, that you’re to the point, that you have that supporting  evidence and information.”

•     “When you get a chance to talk with somebody,” do it instead of writing an email, whether it’s a driver talking with the officer at roadside or a fleet executive or owner getting on the phone before or after filing a DataQ. The goal is to better understand the regs and to develop relationships with law enforcement in  jurisdictions you run in, so that you’re respected as a professional, ensuring fair consideration of your DataQs. Turner recalled a lawyer who filed too many poorly supported DataQs. “It was throwing spaghetti at the wall to see what would stick,” he said. “That's going to degrade your relationship.”

Turner, Haney and others emphasize that feelings or anything else that can’t be substantiated have no value in a DataQ filing. Haney, who has carefully chosen his filings over the years and never lost a case, gave an example of how clear evidence makes a difference.

One of Payne Trucking’s drivers was in a left lane of a curving roadway, preparing to turn left, when he collided with a four-wheeler to his right. The Payne driver was cited for something like failing to maintain his lane.

However, the truck’s dashcam video, when zoomed in, showed the car driver’s left hand at the top of the steering wheel and turning sharply left right before the collision.

The car was towed at the owner’s request, though the video also showed an officer driving the woman’s car to the tow truck, indicating the vehicle was not inoperable. Therefore, it was not a recordable accident, though it had been reported to the system as one, given the tow-away.

“Not only did the video help the driver get out of the citation,” Haney said, “but I also used the video to [successfully] challenge the recordable accident.”

As his “first best practice” in collecting evidence for accidents, Haney recommended any truck owner to invest in dashcam recorders. “They will pay for themselves over and over and over again.”

All of the stories and more in the "Setting the Record Straight" package: 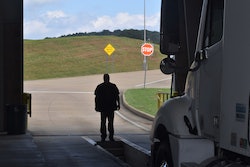 How info errors hurt, and the owner-op's DataQs advantage