John Baxter, Overdrive’s Equipment Editor, writes about his Vietnam service in a Memorial Day tribute to all U.S. Armed Forces personnel who died in war. For more of his equipment perspectives and truckers’ wartime stints, read the OverdriveRetro Equipment Innovations and other stories there.

I gained a lifelong love of trucking and a profound respect for truck drivers in 1968, when I was deployed to Vietnam with the First Logistical Command, helping to feed the 23rd Infantry Division of the U.S. Army.

As a Specialist 4th class in refrigeration equipment repair, I was trained to fix air conditioners and refrigeration, and then sent to Chu Lai along the South China Sea coast. The most difficult task was trucking provisions to LZ Baldy, a landing zone where U.S. Army’s 196th Light Infantry Brigade soldiers and First Marine Division troops were headquartered.

Our 5-ton Army tractors pulled reefer vans about 30 miles up unpaved, rocky Highway 1 nearly every day of the week.

My primary job was to keep the trailers’ refrigeration units running. The refrigeration units were fairly reliable. But long hours took their toll on the spark plugs, ignition wires and coils of the small gasoline engines that drove the compressors and fans.

Frustration ruled the first time I requested spark plugs at a nearby maintenance company. The clerk said, “You can’t order … freakin’ spark plugs till you have the …freakin’ part numbers.” He then explained that our unit could not order what we needed until we ordered, and much later received, technical manuals with the part numbers shown on illustrations.

After finally getting the part numbers, my unit still had to file forms to show a need for the parts. Even after we finally got the ordering process figured out, parts still arrived only sporadically. It often seemed the Army was more concerned with preventing units from stockpiling parts for trading purposes than in supplying them.

When the reefers were out on the road, I often repaired trucks, tightening driveshaft U-joint bolts on the 2 ½ ton trucks or replacing frayed brake lines. Also, I ferried trucks and trailers around the base. On a few nights, we were short of drivers and I hauled food from the seaport to our storage facilities.

I first learned to back a trailer while in Vietnam, and I began to understand the challenges truckers face. The first time I drove a 5-ton tractor with trailer attached, the air brakes failed. The discharge air-line came right off the air compressor and all the air pressure leaked out of the system. Luckily, these trucks had an air-over-hydraulic system that used air pressure only to reduce pedal effort, like power brakes on a car. There was still a hydraulic brake system that was okay. By pressing really hard on the pedal with both feet, and downshifting the little high rpm LDS-465 diesel (which had a lot of engine braking), I got the vehicle under control. In fact, I completed the run by just keeping my speed down and avoiding tailgating. Once back in the motor pool, I made sure the motor sergeant knew exactly what was wrong so the truck would not be used again until repaired.

I struggled to keep the reefers running by repeatedly cleaning and re-gapping old spark plugs and ignition points, and often had to experiment with numerous carburetor adjustments to get the units running. My skill with the engines later got me a commendation medal, and I got to travel to other bases to check out their refrigeration.

One of those bases was the LZ Bronco, which I learned years later was the base from which Lt. William Calley’s ill-fated attack on the village of My Lai had been launched only months earlier. In spite of the brutality of that fateful day, many Vietnamese, even in that area, coveted the American troops’ protection. Many local Vietnamese worked in the Army mess halls, and occasionally they told us they were glad we were around.

America still feels a sense of defeat since it pulled out of Vietnam before the government of the South was fully ready to defend itself. I lost a lot of sleep over the war for a few years, but I finally decided that Vietnam is now an emerging nation and light years ahead of other Communist countries like North Korea and Cuba.

I believe our nation’s involvement there had a positive effect on the culture that somehow survived the conquest by the North Vietnamese to give Vietnam a brighter future.

John Baxter is Equipment Editor for Overdrive and Truckers News. 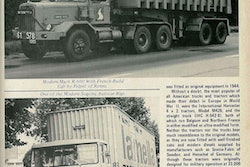 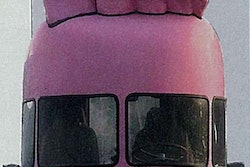