Reasons for the rise in truck-occupant crash deaths

Following statistics from the National Highway Traffic Safety Administration we reported on Dec. 11, which showed highway deaths overall had fallen to levels not seen since the 1940s but were concurrent with a sharp rise in truck-occupant deaths and injuries, readers weighed on reasons for the latter. Two big themes emerged as drivers blamed two primary factors for the rise (from 530 deaths in 2010 to 635 last year): the inflexibility of the 14-hour window in the hours of service rules (combined with the growing use of electronic onboard recorders, or EOBRs) and a perceived influx of drivers with little to no experience.

Study the experience level among working drivers and “I think you will find that the average years of experience of drivers is dropping,” one commenter noted under the story at OverdriveOnline.com. “And the hours of service are causing more fatigue problems, because many drivers fail to take short breaks [to maximize available hours]. I myself used to take a two-hour nap in the p.m.” No longer, the driver added, or at least less often. “I think more drivers are pushing through.”

Add a rate and pay dynamic that many owner-operators find lacking and some drivers are led to run even harder, noted Jason Haggard on Overdrive‘s Facebook page, “under an hours of service regulation that is out of touch with reality.”

Below find a round-up of other points among the raft of opinion the story drew:

Experience:
Tim Thomas: As an ex-trainer at a major truck driving school where all they wanted you to do is teach people how to pass a test, there needs to be regulation on how much training needs to be done. There are companies out there who spend less than two months from the time you get your permit to the time you are sent out on your own. Not nearly long enough.

Hal Kiah: The inexperienced and poorly trained drivers we have in the trucking pool today is one. The type of other drivers we have on the roadways today and the disrespect they have for the big rigs is another.

Mark Warzyniak: Get the laptop off the dash and the headphones off your head — stop texting and drive!

Christy Stiel: Too many new drivers coming out of trucking school still not knowing what it’s really like to be out on the open roads and the daily dangers out there.

Jeff Cockrill: There are two kinds of drivers. First is the true truck driver — he uses mirrors and common sense. Second is the one that just calls it a job and wants a check.

David P. Collins: The answer is mostly inexperience — study the number of company-hired trainees to train trainees themselves in the seats of trucks with loads they know nothing about. [The practice] is a loaded mistake and a crash waiting to happen.

Hours of service/EOBRs
Josh Butcher: I run eLogs and I am more tired now than I was before when I could stop and sleep. A nap is refreshing in the middle of the day. But with no way to stop the 14-hour clock…

Robert Edward Morrison: [FMCSA messed up] the sleeper berth rules and took away the ability to stop and take a nap when you need it! I predicted this would happen, and it is a major reason why I left the industry over four years ago.

Mark Truman: [Inability] to stop the clock, even if you’re tired.

Mike Hansen (queue sarcasm): It certainly does not have anything to do with the 14-hour clock and EOBRs. Drivers are not in a hurry at all.

The most common truck crash I see is the rollover– typically a truck blown over into a ditch by winds over 58 mph or a truck that takes a curve too fast and lays down on its side. Typical causes: low steer tire pressure (blowouts), crosswinds with high wind speed, and lack of braking and/or throttle response because the driver doesn’t know the correct way to react to such a situation. It’s especially bad with rookie drivers, who simply lack the experience to handle emergencies.

There are several fixes for these issues, including mandating more driver training during CDL school, equipping large trucks with modern safety features (TPMS, ESC, driver’s airbags, steel safety-caged cabs that pass the Swedish Impact Test) and making sure the hours rules are in touch with reality. ESC (full Electronic Stability Control) is an especially promising feature that could save the lives of hundreds of drivers each year — it’s a feature that should be made mandatory on all new trucks.

Larry Hanks: Not enough driver training for cars about how dangerous trucks can be and that they have blind spots.

Tony Blackburn: I think it has a lot to do with the technology that a lot of drivers are distracted by, as well as trying to run harder in a shorter period of time

Tim Hilton: Ever thought of putting airbags in tractors? I never could understand why they never had any when every automobile has at least two and as many as what? 10 or more? 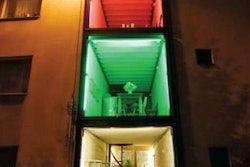 More than an office: Other novel uses for shipping containers