Word came in Thursday, March 20, from Tony Hensley to Overdrive‘s Facebook page that an electronic-logging-device-mandate petition was launched on the White House’s “We the People” website, created to serve as a platform for U.S. citizens to lobby the executive branch directly through petitions. Hensley was unsure of its origins, knowing only what’s publicly available information — that it was created March 19 by a resident of Lima, Ohio, with the initials D.N. The petitions.whitehouse.gov website’s privacy policy includes the withholding of full names.

Language of the petition, which has a goal of 100,000 signatures collected by April 18, reflects voices of opposition among many Overdrive readers. While it uses the term EOBR rather than the ELD terminology of the mandate itself, it’s clearly targeted toward the recently-released proposal from the Federal Motor Carrier Safety Administration. Read more about the FMCSA proposal in stories linked throughout this post.

“These devices do not make American highways or trucks any safer,” the petition reads. “Safety is achieved with proper training and education. These devices will only serve to force small trucking companies and independent truck drivers to close because they simply cannot afford the potential required equipment and subscription costs.”

You can read the full petition via this link.

Others objected to the devices, particularly when employed coupled with fleet-management capabilities, on driver-control and -harassment grounds. Recently retired trucker Elmer L. Rose of Lakeland, Fla., read James Jaillet’s story about the anti-driver harassment portion of FMCSA’s proposal with interest. Rose had recently severed ties with a company with whom he leased a truck. He “had a very hard time paying for” the first truck he’d leased “but finally paid it off. Then, I leased another truck and two weeks in, the company used e-logs against me to make me pick up a load I didn’t want to take,” he wrote. “If I hadn’t been able to pick it up early, I wouldn’t have been able to make it to a truck stop,” which he did but with just 11 minutes to spare on his drive time.

Ultimately, Rose felt pushed beyond his limits as a result of an aggressive effort on the carrier’s part to maximize drive time. It all resulted in his leaving the company and retiring. “I still have over $2,000 in my escrow account, and I think they will find a way to take that,” he wrote. “So I believe [the use of and mandate for ELDs] is nothing but a way for the trucking companies and the government to make more money off truckers.”

More than 50 percent of respondents to a poll anticipating the ELD mandate earlier this month indicated a preference for retirement or another line of work over trucking with an electronic log. Not all Overdrive readers, however, were opposed: 1 in 4 indicated they would find a way to make it work or were running e-logs already.

Find more coverage in this story about readers’ response to the proposed mandate. 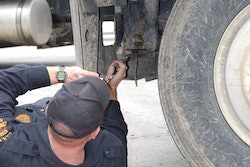