As noted in Overdrive‘s earlier coverage today, the Federal Motor Carrier Safety Administration laid bare its potential plans for overhauling hours of service regulations, highlighted by proposals to allow drivers to pause their 14-hour clock, ease restrictions around the 30-minute break and allow a slightly more liberal use in split sleeper options. (The proposal would allow up to a possible a 7/3 split allowance with neither period counting against the 14-hour clock, rather than the current 8/2 where the shorter period contributes to the rolling 14).

The proposal was met with quick praise from trade groups like the Owner-Operator Independent Drivers Association, the American Trucking Associations and the Truckload Carriers Association. However, reaction among Overdrive readers has been split, with some welcoming the proposed changes and others dismissing them. Some, too, have questioned whether the allowed pause of the 14-hour clock will unintentionally lead to longer days for drivers — especially if shippers and receivers try to make the three-hour pause a standard operation around detention.

“Oh, so you mean shippers and receivers will now take an extra three hours to load or unload us since they know we’ll be able to do that?” wrote John Nazars in his response on Overdrive‘s Facebook page. “Why doesn’t FMCSA allow DOT cops and state troopers to be able to [ticket and fine] the shippers and receivers for holding drivers past a certain time? Obviously they can just look at our e-logs now and see that ABC whatever company held us in their docks for X amount of hours. This isn’t going to solve anything until they go after these supply chain logistics companies.”

A reader posting Perry on OverdriveOnline.com in part echoed Nazars with his thoughts: “After implementation, every day will become a 17-hour day at most carriers.”

Conversely, however, many readers welcomed the changes.

With more options to pause the 14-hour duty day without penalty, “Drivers will be able to nap if they get fatigued,” Samuel Offett wrote at the Facebook page. “This was a major problem to the safety of the driver and the general public.”

“Would fix the issues in my opinion. It’s a great idea.. and would allow guys to nap if they want to in the middle of the day,” said Robert Peterson.

Dutch, at OverdriveOnline.com: “The 14-hour rule has caused more accidents as a result of racing through construction sites and elsewhere to beat the clock. Extending the hours is definitely a step in the right direction.”

Likewise, OOIDA lauded the proposal as a “common sense” approach to hours regs. It was, in one way, OOIDA’s 2018-floated plan that was proposed by FMCSA on Wednesday. OOIDA petitioned the agency last year requesting the ability to pause the 14-hour clock for up to three hours.

“There may not be a one-size fits all solution, but the proposed changes are a positive start since truckers don’t have any control over their schedules or traffic conditions,” said OOIDA president and CEO Todd Spencer. “For too long and too often, they find themselves in unsafe circumstances because of current, overly restrictive rules that decrease highway safety.”

ATA also says it hails the proposed changes. “Secretary Chao and Administrator Martinez are to be commended for their commitment to an open and data-driven process to update the hours-of-service rules,” said ATA President and CEO Chris Spear. “We look forward to studying and understanding how these proposed changes will impact our industry so we can provide relevant data and information to strengthen and support a good final rule that bolsters safety and provides drivers needed flexibility.”

In a conference call with reporters, FMCSA enforcement chief Joe DeLorenzo suggested the agency was open to data that might bolster the safety case for further liberalization of the split-sleeper rules, a change that was suggested by the Trucker Nation group well ahead of the agency’s formal efforts to collect data and opinion on hours change. Regarding the split-sleeper changes proposed, “we moved forward with a proposal based on the data and information we have available,” DeLorenzo said. He also noted that when the request for comment is posted in the Federal Register Monday, August 19, and the comment period begins, the agency would be asking “a series of questions … about the possibility of more data being available” to address other split scenarios or options.

“We applaud the agency’s efforts to create safety-first, data-driven regulations,” said TCA President John Lyboldt, responding to the proposal overall. “The initiative to reduce roadway fatalities represents an industry lift for which TCA is committed to uniting with our federal agency partners.” 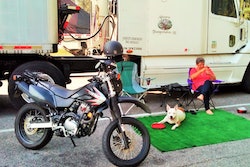