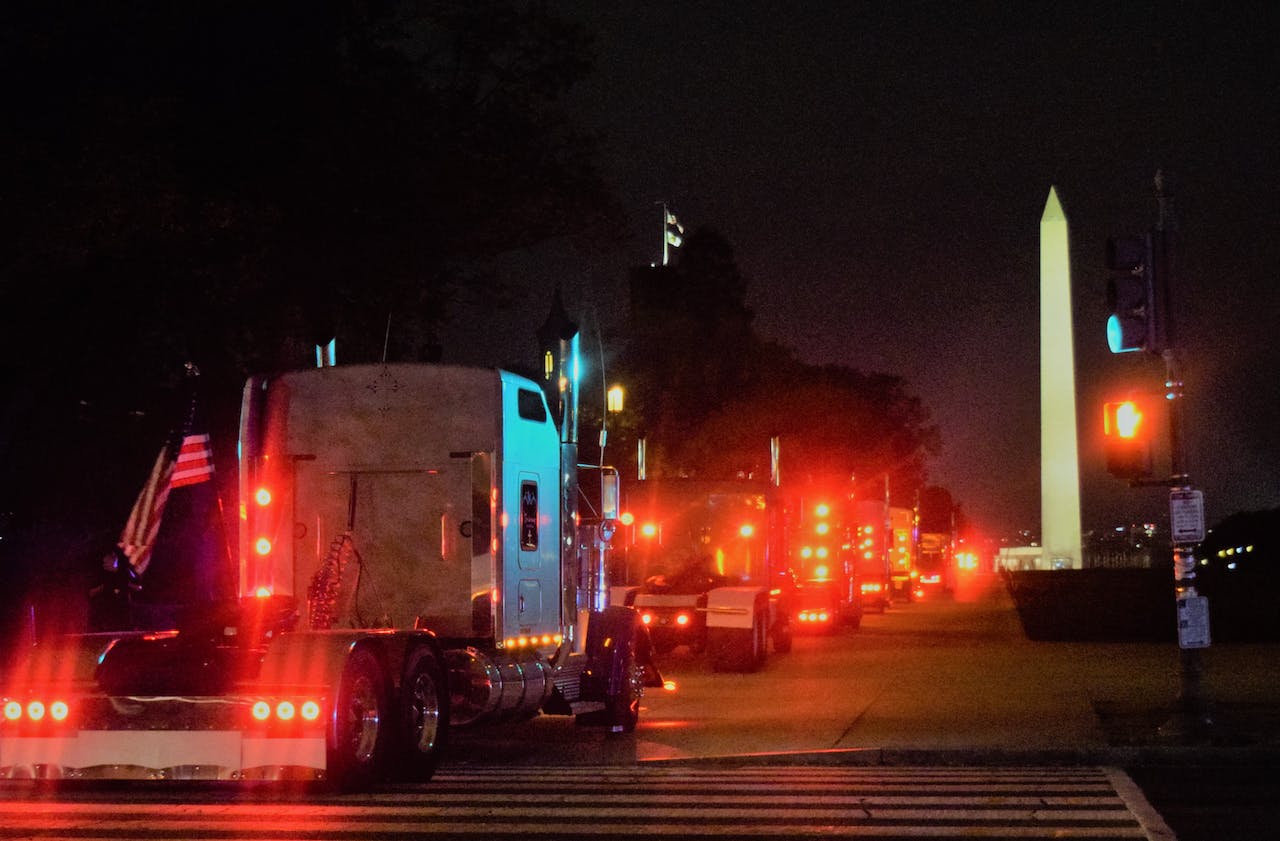 Nearly 40 bobtail trucks convoyed from the Fredericksburg, Virginia, agricultural fairgrounds near midnight Oct. 2, to arrive at the second annual That’s a Big 10-4 on D.C. public outreach event on the National Mall in Washington, D.C. The second year builds on the goals of the event last year — with greater emphasis on simply providing a welcoming atmosphere for D.C. locals and tourists to engage with truck owners, learn about the business and cultures of trucking, and understand the nature of the many issues drivers contend with. 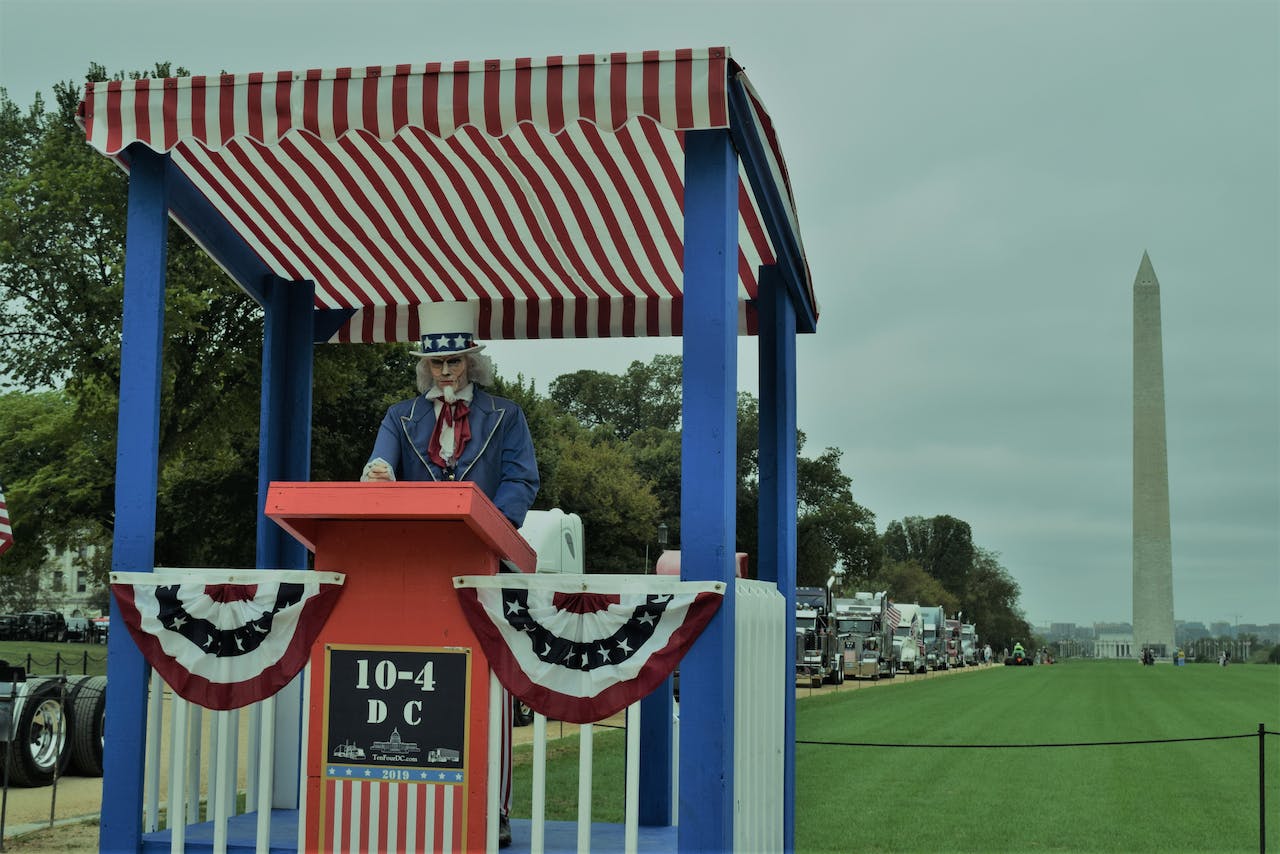 The scene this morning. 10-4 organizer Fred Bowerman brought along a ridealong passenger in his cabover: Uncle Sam here and the podium in a trailer along with other gear “in case anyone wanted to speak.”

“If you feel that there’s a problem in the trucking world, this is where you should be,” says owner-operator Germann Soeth of Frederick, Md. “10-4 is for you, the driver, and I really believe that.”

Soeth and others had been hopeful for increased participation after last year’s 50-truck event, but as of midday Thursday it didn’t look as if organizers would hit that number this year.

Repeat participants like Soeth, and plenty for whom this was their first trip to D.C., were busy Thursday morning explaining issues of hours of service, electronic logging devices, parking pressures and more to passersby — and at least one group of volunteers from a presidential campaign. 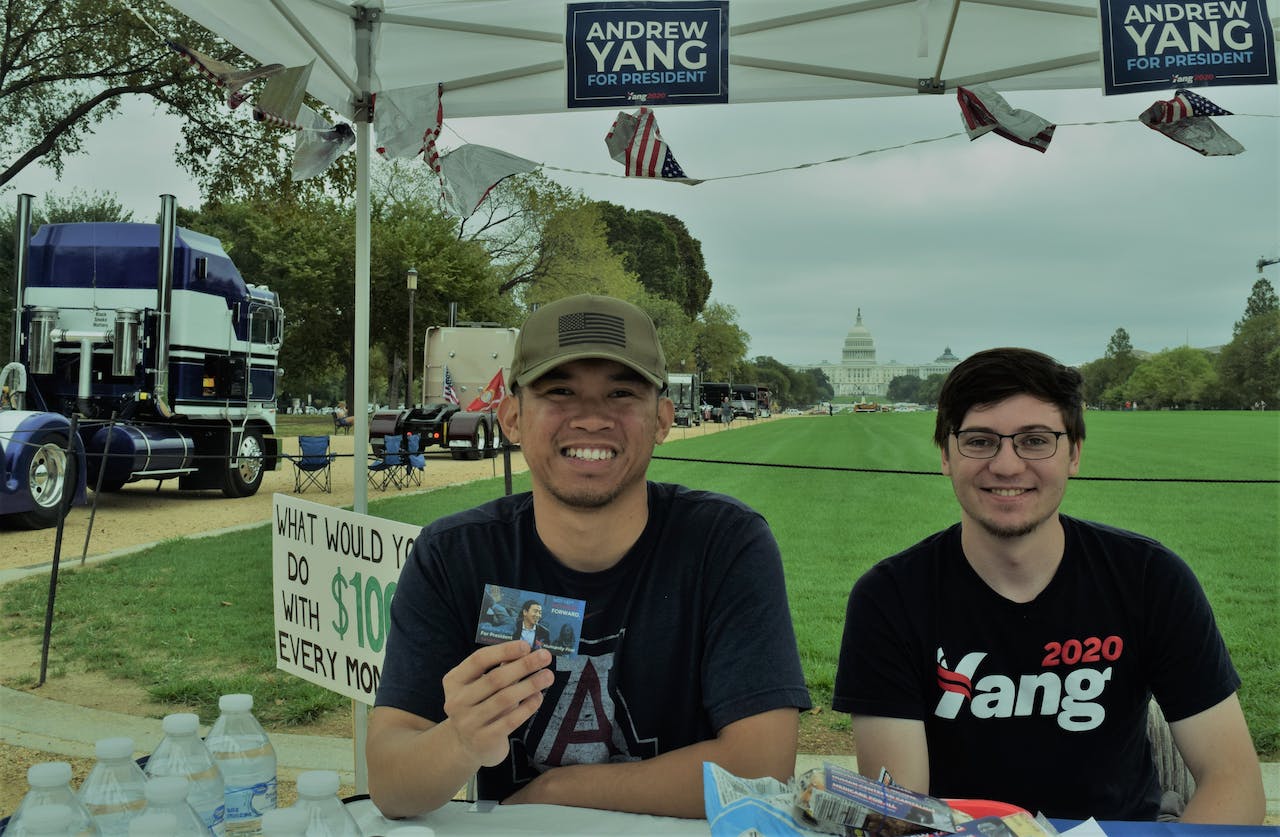 Alex Aquilod (left) and Mike Perola, representatives of the Andrew Yang Democratic presidential campaign, are set up amid the bobtails parked along the wide walking paths on the mall. Yang’s platform urges a novel approach to displacement of employment by automation. He is virtually alone among presidential candidates in having any focus whatsoever on trucking. His approach is not to slow such tech advancements down but rather attempt to empower those across sectors who become victims of it. One central element of the platform: an idea for a $1,000 baseline income for all U.S. citizens. 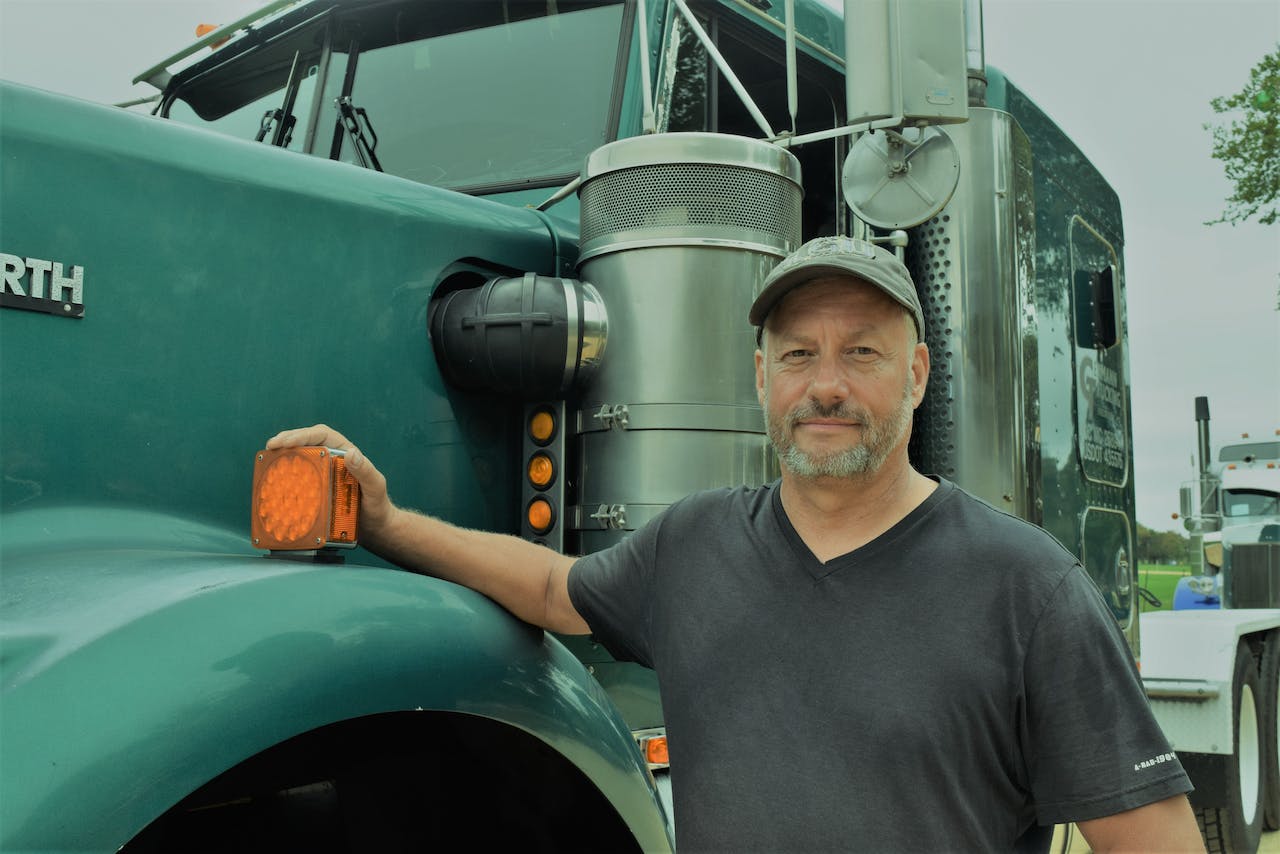 Owner-operator Kit Spanfellner is among the first-timers at 10-4 on D.C. It was his “first time ever in D.C., actually,” he said. Leased to Northwest, Ohio-based Davidson Trucking, his 2015 Kenworth T680 was one of three Davidson-affiliated trucks to make the 550-plus-mile trip for the event. Spanfellner bobtailed, too, a significant investment in the trip. (Luckily, the T680 running flat land was averaging 12 mpg.)

“It really means a lot to be here,” Spanfellner says. He’s focused on issues of driver training (“so many of these poorly trained drivers are out here making the rest of us look bad; we need to really raise the bar,” he says) and parking, among others. 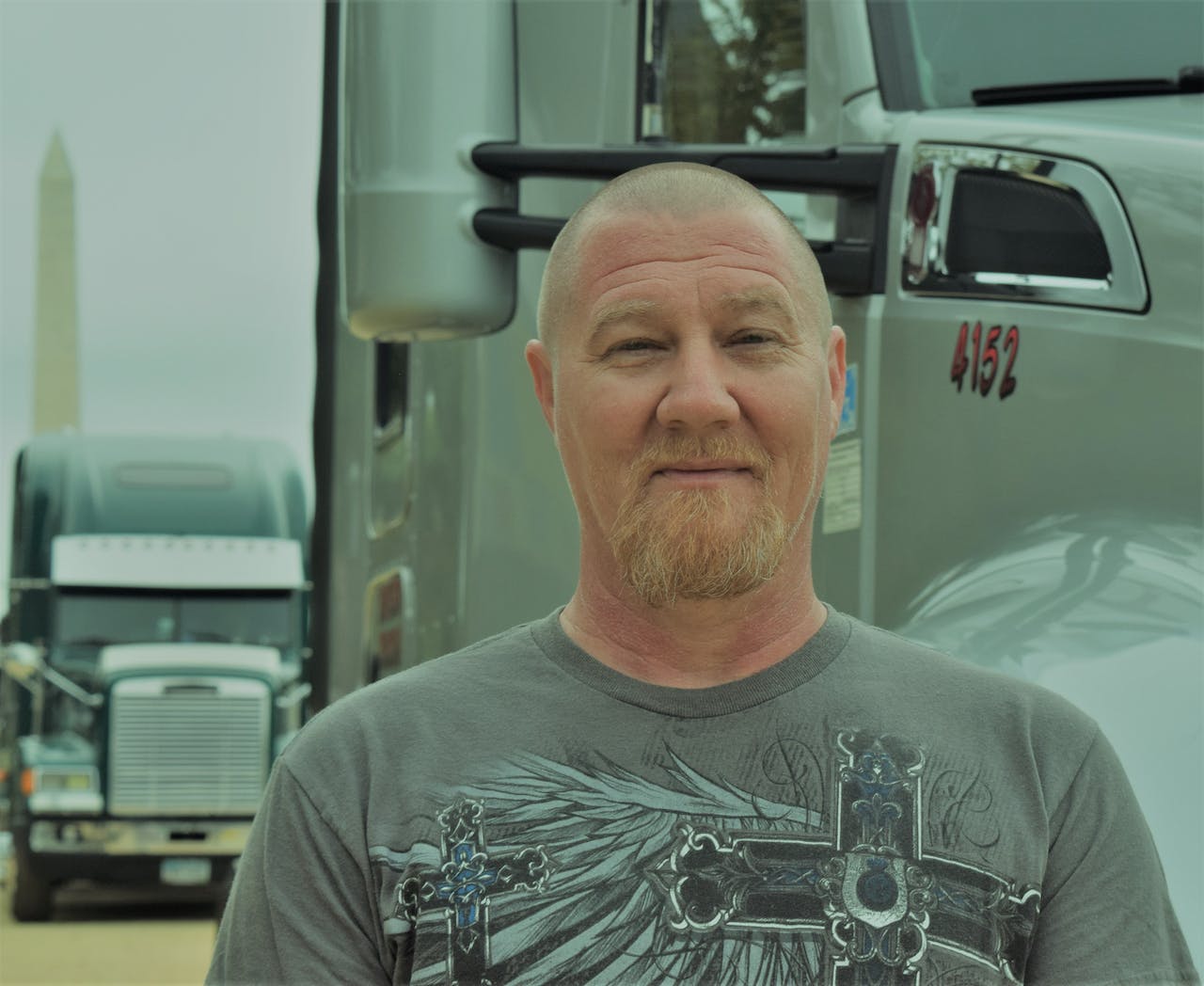 He believes the one-two punch of the 14-hour rule and the electronic logging device mandate have not been positive for safety, in any fashion. “Too many folks are racing the clock,” incentivized by the very nature of the rules to get it done as quickly as possible.

There’s plenty more lighthearted moments to go around, including this one around the 2003 custom-modified and near totally rebuilt Kenworth W900L of Randall and Trish Tedrow of Jackson, Ohio: 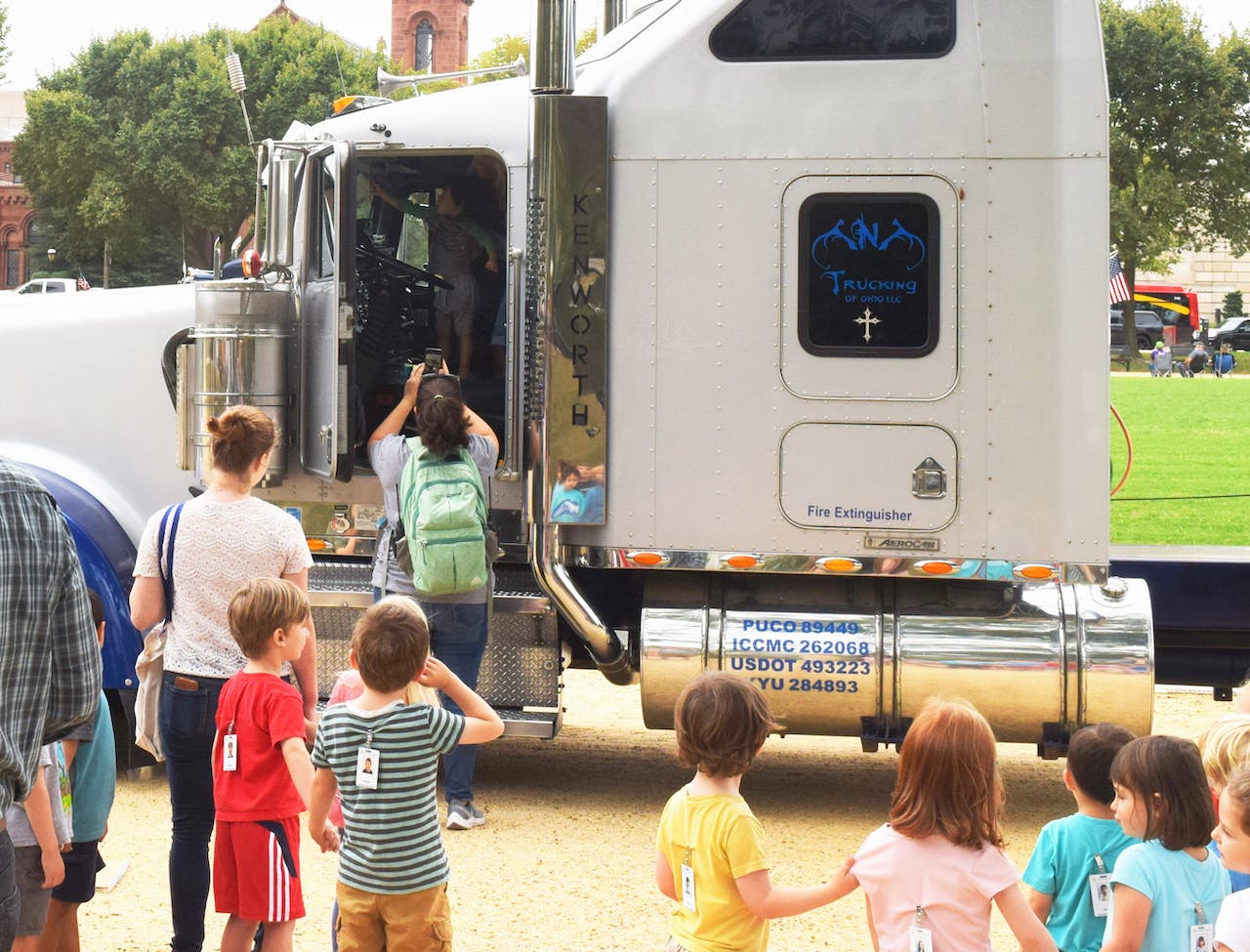 The Tedrows’ horn got quite a workout from this group. Halfway through, Randall had to build air in the system so they could keep going.

A woman and her child just passed by as I was writing this on a park bench by owner-operator Soeth’s truck. “Why are all the trucks here?” the child asked.

Her mother: “The truckers are voicing their opinion, and that’s one of the great things about living in this country, that we can all do that.”

Though we all may not agree with each others’ opinions, the child agreed, at least the opportunity to speak and be heard is part of it all. “Yeah,” she said, “that is a great thing.”

The dozens of truckers involved in That’s a Big 10-4 on D.C. will be on the National Mall, this year toward the Washington Monument end of the park, through Saturday morning. Turnout thus far is roughly similar to that of last year’s event, with some further arrivals expected today and tomorrow. Photos taken early Thursday morning at 1 a.m. EST by Overdrive Senior Editor Todd Dills. Stay tuned for more coverage.

Participating owner-operators and drivers will be parked on the mall through early Saturday, followed by a convoy back for some R&R at the fairgrounds in Fredericksburg, Va., Saturday. 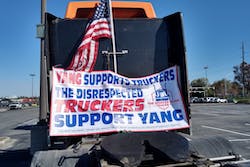 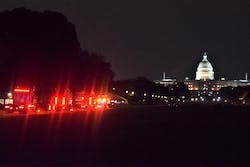 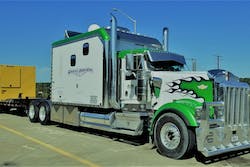 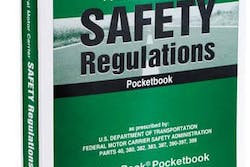 POLL: Have you filed a coercion complaint under the rule protecting drivers?