I spoke this morning with owner-operator and That’s a Big 10-4 on D.C. organizer Bryan Hutchens about what happened after my time there on Thursday, Oct. 3, last week among the three dozen or so owner-operators and others parked on the National Mall for the public outreach event. The upshot of his four-days-later post-mortem — time will tell as to whether the second-annual event served as proof of the concept: A gathering that serves as public outreach and awareness vehicle, as a platform for individual owner-ops and drivers to represent themselves to those in the environs of the nation’s capitol, whether passersby, Congresspeople, regulators or the media, certainly more of the last of which were on hand this year in contrast to last.

The event culminated after the Saturday roll-out back in Fredericksburg, Va., at the agricultural fairgrounds there for a day and evening of rest, relaxation and camaraderie. Unlike last year’s gathering — which followed those couple brief highway stoppages some participants orchestrated and which left some others, I know, disappointed in that final run of the event — there was little in the way of argument amongst the participants, Hutchens says. “Nobody was pushing an agenda – it really felt like a neutral platform.”

As with last year, the group collected food donations for the Fredericksburg Regional Food Bank, ate well, and honored longtime owner-operator of an early-mid 1980s A Model Kenworth, Artie Daniel, among the event participants, as an inspiration.

“I wish we had video of the speech that Artie Daniel gave,” Hutchens says. “He’s been in trucking 45 years. He’s one of the men who’s built the industry into what it is today. Everybody there was choking up. That was a very special moment.”

One of those choked-up owner-ops was Mike Landis, he says. “For me, personally, Artie is one of those guys who for years I’ve known about and finally got to meet the last couple of years. It was emotional for all of us – he’s trucking his old A Model up the road and doing it how he wants it done.”

His basic message, in Landis’s summation: “if you have the passion for something, you’ll succeed. He himself has a passion for trucking, and he’s happy that there are people trying to carry it on.” He also emphasized three priorities, in this order: “Jesus, family, then work. If you get those things in order, everything will be just fine.”

On day 2 on Friday, 10-4, FMCSA Enforcement and Compliance Director Joe DeLorenzo came down and, among other things, illustrated various aspects of the proposed hours of service changes with grid examples for attendees, Hutchens says. Several participants took a tour of the White House on Thursday, the prior day.

“Last year,” says Landis, “the event was great” despite some internal divisions. “But this year,” he added, those involved left feeling more upbeat. And the public was in the mood, too, “right up until we left.” As a videographer was set up attempting to film the roll-out (catch moments from the roll-in at top), Landis adds, “I couldn’t leave because I had two little boys touching my Pete’s wheels and stuff.”

“I feel like this was the proving grounds,” Hutchens adds. “A lot of people didn’t want to be involved after last year. But already, I’ve had a lot of calls from people that want to come next year. We’ll see what happens down the line.”

Hear further commentary from the event from owner-operators Germann Soeth, Kit Spanfellner, Bryan Hutchens, Ruben Carrion and Mike Jellison, and catch plenty scenes and sounds from the event, via the video at the top of this post. 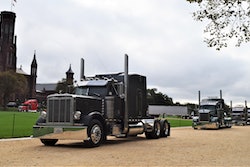 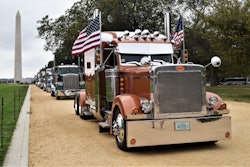 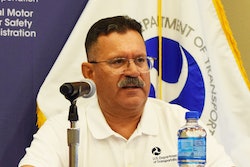 Ray Martinez stepping down as FMCSA boss at month’s end