Truck and bus drivers who text while driving commercial vehicles may be subject to civil or criminal penalties of up to $2,750. The DOT action doesn’t prohibit the use of cell phones for purposes other than text messaging.

Nineteen states and the District of Columbia already prohibit all drivers from texting behind the wheel, according to the Governors Highway Safety Association. Another 10 states restrict texting by novice drivers.

Federal Motor Carrier Safety Administration research shows that drivers who send and receive text messages take their eyes off the road for an average of 4.6 seconds out of every 6 seconds while texting. At 55 miles per hour, this means the driver is traveling the length of a football field, including the end zones, without looking at the road.

The prohibition is the latest in a series of actions taken by DOT to combat distracted driving since DOT Secretary Ray LaHood convened a national summit on the issue last September.

“We want the drivers of big rigs and buses and those who share the roads with them to be safe,” LaHood said. “This is an important safety step and we will be taking more to eliminate the threat of distracted driving.”

Drivers who text while driving are more than 20 times more likely to get in an accident than non-distracted drivers.  Because of the safety risks associated with the use of electronic devices while driving, FMCSA is also working on additional regulatory measures that will be announced in the coming months.

For more information on distracted driving go to www.distraction.gov. 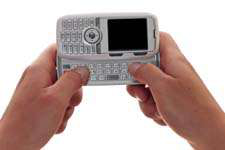