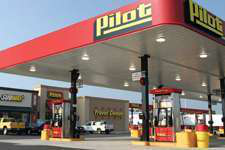 Pilot Travel Centers LLC and Flying J Inc. announced June 30 the completion of the merger of the two companies, creating a network of more than 550 interstate travel centers and travel plazas. The combination becomes effective July 1.

Pilot Flying J is selling 26 locations to Love’s Travel Stops & Country Stores as required by the Federal Trade Commission as a condition for the merger. For a list of the affected locations and additional information about the merger, visit www.pilotflyingj.com.

The new Pilot Flying J operates in 43 states and six Canadian provinces and employs more than 20,000 people. It is one of the top 10 privately held companies in the United States.

“We are now one great company, two great brands,” said Pilot Flying J President and CEO Jimmy Haslam. “Our new organization is a combination of two of the best-known brands in the travel center industry, both with strong family histories and shared values.

In July 2009, Pilot and Flying J announced a preliminary agreement to merge their travel center operations.

Other plans call for enhanced restaurant offerings with national brands in all locations. Brand additions to Flying J locations in the new network include Denny’s, Subway and Pizza Hut. In addition, there will be upgrades to drivers’ lounges, new gasoline and diesel pumps, enhanced showers and remodeled restrooms at many locations.