J.D. Power: Truck quality improves but at what cost?

Heavy-duty truck quality improved substantially in 2011 over the previous year, but whether these quality gains can be sustained along with greater production and new emissions regulations remains in question, according to the J.D. Power and Associates 2011 U.S. Heavy-Duty Truck Customer Satisfaction Study released June 30.

The study finds that quality of one-model-year-old Class 8 trucks has improved by 29 problems per 100 vehicles (PP100) in 2011, compared with 2010. Among trucks in service between 13 and 18 months, problems have decreased by 23 percent during the past six years, declining to an average of 198 problems per 100 trucks in 2011from an average of 257 PP100 in 2006. Lower PP100 scores indicate a lower rate of problem incidences and, therefore, higher quality.

“In recent years, commercial vehicle manufacturers and suppliers have made great strides in improving the quality and reliability of heavy-duty trucks, but the focus will quickly turn toward maintaining these levels at a time of increased production volumes and the release of 2010 EPA-compliant engines,” said Brent Gruber, senior manager of the commercial vehicle practice at J.D. Power and Associates.

Historically, customer satisfaction with heavy-duty trucks has declined immediately following the introduction of engines that meet revised EPA regulations. In 2010 and 2006, both heavy-duty truck and engine satisfaction declined immediately following the implementation and sale of engines meeting EPA regulations that were revised in 2007 and 2004, respectively.

In the vocational truck segment, Peterbilt ranks highest, followed by International. No rankings were made in the over-the-road segment because of a lack of rank-eligible brands, J.D. Power said.

The 2011 Heavy-Duty Truck Customer Satisfaction Study is based on responses from 1,651 primary maintainers of one-model-year-old Class 8 heavy-duty trucks. The study was fielded in April and May. 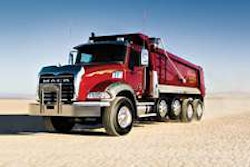