Some photos are so powerful they seem to broadcast the aroma of a diner’s hot breakfast or the sound of a trucker’s voice over the CB. Culled from 50 years, the classic images in these galleries epitomize some of trucking’s big moments and the feel of bygone eras.

See the Top 10 entries for each gallery by visiting 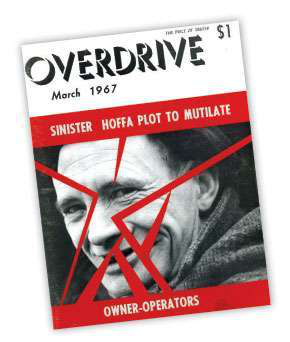 Teamsters leader Jimmy Hoffa appeared on the cover of March 1967, the month he entered federal prison on bribery and, later, fraud convictions. Teamster activities, considered a threat to owner-operators, were covered extensively. 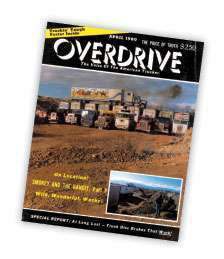 Drivers recruited by Overdrive portrayed themselves as extras in “Smokey and the Bandit, Part II,” part of the classic Bandit movies starring Burt Reynolds. 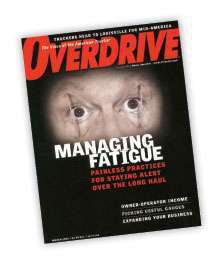 The March 2003 cover about driver fatigue was a sobering reminder of how serious the subject is.

“Moonfire,” a film produced by Overdrive in the early 1970s, featured this Mack conventional, which Richard Egan drove as hero Sam Blue.

The signature show truck is the Peterbilt 379. This 1988 model, Plum Classy, is owned by Neal and Barbara Holsomback. They’ve won many trophies at Pride & Polish, launched by Overdrive in 1990.

Truckers have associated International Trucks with corn because of the link to International Harvester, which sold its farm division in 1985 and renamed itself Navistar. The model was Michelle Reeves.

Posing for the May 1973 Overdrive, Regina Meredith added polish to the Dodge Bighorn in her capacity as a model for Chrysler. She became co-anchor of NBC’s NFL pregame show in 1977.

Before posing as a Playboy model in July 1982, Lynda Wiesmeier was Overdrive’s December 1981 Date Master, appearing with a Ford CL 9000.

The tastefully-attired blonde in this September 1975 ad typifies decades of Peterbilt’s “Class” campaign in the pages of Overdrive.

Don Knotts, who made Barney Fife a TV legend on The Andy Griffith Show, stumped for Chrysler in the ’70s, promoting Dodge’s heavy-duty tilt-cab diesel in the May 1970 issue.

In December 1965, Truck Town in Colorado City, Texas, advertised its modernized stop with covered fuel islands and a large restaurant near I-20.

What are the most memorable photos from your trucking history? Send them, and tell us what you were doing then, to LCoulter@rrpub.com. We’ll use them on our history site, OverdriveRetro.com.