ODOT placed 231 drivers out of service from Oct. 17 through 22 in log book checks at several inspection sites on major Oregon highways. The inspections also found safety equipment violations that placed 49 vehicles out of service.

These 1,037 driver and vehicle inspections resulted in 263 violations that placed the driver or vehicle out of service.

Placing a driver out of service means the operator can’t drive until taking a mandatory rest break or correcting safety violations.

During a multi-day commercial vehicle driver inspection operation Aug. 30 to Sept. 3, 810 inspections resulted in 33 percent of drivers placed out of service for safety violations. That compared with the 27 percent average rate for a similar exercise in July, and 26 percent from 2010 inspections.

The national driver out-of-service rate is about 6 percent. 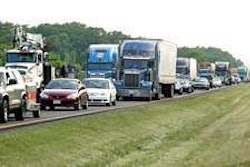