Introduced for 2010 as part of a broader effort by the agency to refine its data collection to get better information about the role of distraction in crashes, the new measure is designed to focus more narrowly on crashes in which a driver was most likely to have been distracted.

While NHTSA’s Fatality Analysis Reporting System previously recorded a broad range of potential distractions, such as careless driving and a cell phone present in the vehicle, the new measure focuses on distractions that are most likely to affect crash involvement, such as distraction by dialing a cellular phone or texting and distraction by an outside person/event. New data released by NHTSA using its refined methodology show an estimated 3,092 fatalities in distraction-affected crashes in 2010.

While the explicit change in methodology means the new measure cannot be compared to the 5,474 “distraction-related” fatalities reported in 2009, other NHTSA data offer some indication that driver distraction continues to be a significant problem.

The agency’s nationwide survey of drivers in traffic remains unchanged between 2009 and 2010, with 5 percent of drivers seen talking on handheld phones. In addition, given ongoing challenges in capturing the scope of the problem – including individuals’ reluctance to admit behavior, lack of witnesses and in some cases the death of the driver – NHTSA believes the actual number of crashes that involve distracted driving could be higher.

A new national NHTSA survey offers additional insights into how drivers behave when it comes to texting and cell phone use while behind the wheel and their perceptions of the safety risks of distracted driving.

Among the findings, more than three-quarters of drivers report they are willing to answer calls on all, most or some trips. Drivers also report they rarely consider traffic situations when deciding when to use their phone. 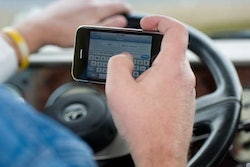