With further aero refinements and an intuitive transmission, the Pinnacle proves its lofty name is well deserved.

Automatic transmissions are making inroads in the North American truck market. Volvo is delivering 40 percent of North American trucks units with its I-Shift automated 12-speed in the driveline. Partner company Mack has done them one better in the Pinnacle, with more than 40 percent of produced units featuring Mack’s mDrive, an automated 12-speed that is smart and slick.

That’s particularly evident after my 700-mile March haul in the driver’s seat of a Pinnacle, grossing nearly 80,000 pounds with a loaded flatbed. From the Mid-America Trucking Show in Louisville, Ky., we crossed rugged West Virginia mountains to get to Mack’s Customer Center in Allentown, Pa. I shared the driving with David McKenna, a 32-year Mack veteran.

At the 2011 MATS, Mack Product Marketing Manager Jerry Warmkessel said the Pinnacle had been through the National Research Council wind tunnel in Ottawa, Ontario, where it delivered a 6 percent gain in fuel economy over previous highway models. Further, Warmkessel said the combination of aero improvements and intelligent mDrive transmission with the new selective catalytic reduction (Mack calls it ClearTech) emissions reducing technology could offer fuel savings greater than 12 percent.

A low-rpm cruise package called the Super Econodyne debuted at this year’s MATS. Gearing so the truck cruises at 65 mph and 1,160 rpm means another potential 2 percent gain in fuel economy for the right applications.

The Pinnacle I drove featured the MP8 at its highest rating: 505 hp with 1,760 lb.-ft. torque. It’s the 13-liter version of the overhead camshaft engines developed to meet 2010 emissions regulations. Though the MP8 is basically the same engine as the Volvo 13-liter, the Mack has its own personality – in this case, the Econodyne profile, which has long been part of the Mack brand. A feature of this profile is EconoBoost, an on-demand torque boost when the full throttle is held for three seconds. The engine adds as much as 200 lb.-ft. at any speed from 1,300 rpm.

It takes an intelligent transmission to account for that. The mDrive has common mechanicals with the automated Volvo I-Shift, but it’s by no means the same transmission. It has unique programming to match it to Mack engines and their distinct power and torque curves.

Threading my way out of the Kentucky Fairgrounds, I was impressed by the way it picked up gears, yet idled easily in traffic. The seating provides an excellent view over the sloping hood, and well-placed mirrors allow comprehensive visibility.

The mDrive doesn’t just respond to the engine – it drives it. Gears are selected according to road conditions. The transmission has an inclinometer so that it knows if the truck is going up- or downhill. It knows what the driver wants through the throttle position and tells the engine what is needed. Starting out, it gradually closes the clutch for an impeccable response to the first squeeze of the throttle pedal. When it’s time to shift gears, the transmission commands the engine to back off and break the torque flow. The transmission then float-shifts to the next gear, exactly matching engine revs to smoothly swap gears.

In an upshift, the transmission may call on the engine brake to slow the rpms, snapping shifts faster than even the best driver could. At Mack’s Customer Care Center test track, when I accelerated up a 10 percent test hill from a standstill, the Mack just picked up gears as it accelerated away, block shifting one to three, then four and five to make the most of the transmission’s capabilities.

Such an extreme start was never necessary on the highway, but the transmission would often skip gears, either to make the most of the acceleration or to bring in the Powerleash engine brake for maximum retarding. At the same time, it worked toward optimum fuel economy. Negotiating Kentucky hills at start, the numbers on the dash display climbed to a very creditable 7.3 mpg. Then as we got into the serious climbs of West Virginia into Allentown, fuel economy crept back to 6.9 mpg — not at all bad given the heavy load and the mountains.

What’s really nice is the way the mDrive handles the unexpected, like a car suddenly slowing in front of the truck or an obstacle in a corner. You can focus on dealing with the situation, confident that when you walk on the throttle again, you’re going to be in the right gear.

We started out mid-morning and took a break after four hours. When I pulled up at the Customer Care Center, gates I felt fresher and more alert than I had at the lunchtime stop. That says a lot for the Mack, and speaks well of the transmission.

Drivers who prefer traditional styling appreciate Mack’s Rawhide edition of the Pinnacle. The Rawhide has a set-forward front axle and a new hood to get the more aggressive, tall-fronted appearance.

The 7-inch bullhorn exhaust stacks mount between cab and sleeper in the established “large car” position, making the Rawhide unique in the Pinnacle lineup. Other models mount exhaust at the back of the cab.

The truck is available in 60- and 70-inch midrise sleepers, plus a daycab.

The Rawhide interior features Ultraleather and two-tone embroidered seats, complemented by a sleek dash housing Mack’s Co-Pilot driver display. Accent strips on the cabinets match the dash panel’s brushed nickel, and the two-tone pattern in the seats is continued in the sleeper in button-tuck.

The MP8 is the 13-liter engine in Mack’s lineup, which also includes the MP7 and MP10. The numbers derive from the displacements stated in cubic inches. The 11-liter MP7 is 670 cubic inches, the MP8 790 and the 16-liter MP10 970. All are single overhead camshaft engines with the camshaft drive at the rear of the cylinder block. This allows the fluctuating loads from the injector lobes on the camshaft to feed directly into the flywheel rather than along the length of the crankshaft, thereby reducing torsion in the engine and improving injection timing performance.

In our test truck, MP8 engine access was good, even with the added complexity of today’s exhaust gas recirculation systems. In fact, the new engines are considerably cleaner, externally, than the earlier E7, and components that might need service are easily accessible.

The MP8 at the 505-horsepower rating has a power density of 38.8 hp per liter, several hundred pounds lighter than similarly rated 15-liter engines. Torque rating is 1,760 lb.-ft.

All MP engines are available in three engine families: Econodyne, MaxiCruise and Maxidyne. The Econodyne personality is mapped for typical interstate applications with extended times at engine cruise speed — part-load, part-throttle applications where fuel economy is a priority. The MP8 in the Pinnacle we drove was an Econodyne and very much the highway tractor.

Backing up the MP8 engine is the mDrive transmission, available exclusively in the Pinnacle. It’s a 12-speed, two-pedal automated mechanical transmission with a base torque input capacity of 1,920 lb.-ft. The mDrive is designed to integrate seamlessly with the MP7 and MP8 engines, and the gearshift is operated by an intelligent shift pad. The mDrive continuously monitors changes in grade (both up and down), vehicle speed, throttle position, acceleration, torque demand and combined vehicle weight.

The Pinnacle has good driver’s seat travel and an adjustable steering column, so it’s easy to set the driving position to the pedals and get the wheel just right. So it really is a cruise with the transmission dropping gears on the long climbs — sometimes one, sometimes two, almost never three — as the Mack MP8 really gets down and goes.

The driver display is a triumph. Gauges are clear and neatly organized around the steering wheel. Moreover, the column control stalk has only an up/down rocker, and the enter and escape buttons.

I had assumed, because the control stalk was the same as Volvo’s, that the rest of the system would be too, but it’s an entirely different interface and it’s even easier to use than Volvo’s.

Leather seats sit nicely far apart. Even with armrests, there’s a full 14 inches of walk-through to the sleeper. However, because the center console stack has big cup holders, a handy shelf and a large storage bin, the seats have to be pushed back when standing up from either seat.

There’s the usual storage in the header and rather stylishly trimmed door pockets. The cab floor had a thick, fitted-rubber mat that no doubt contributed to the low noise levels in this Pinnacle. I spent no time in the sleeper, but the shelves would accommodate duffels and sleeping bags fitted high on each side with a provision on the passenger side for a television and other electronics. Beneath this is a wardrobe, and there’s copious storage under the bunk. One great interior feature is back-of-cab access via the driver-side steps. 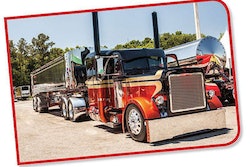 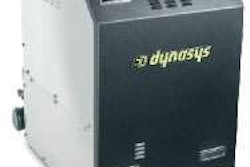 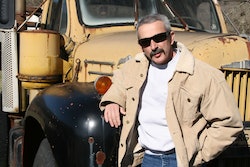