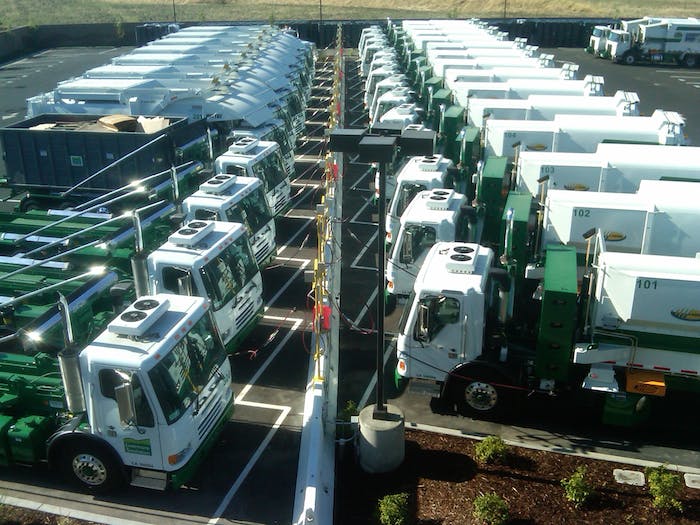 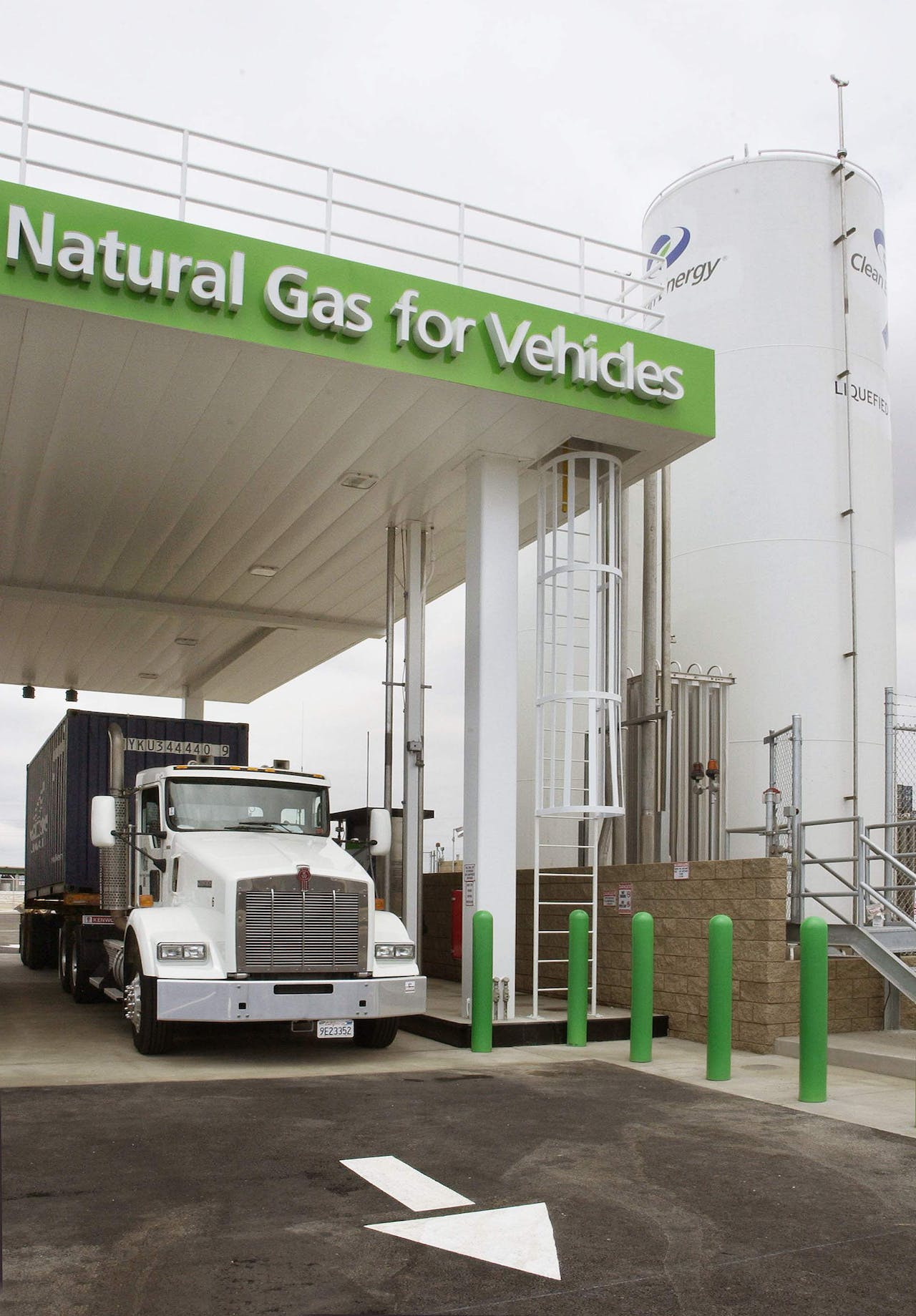 LNG fueling stations are springing up from coast to coast. Available supplies also are expanding because of hydraulic fracturing techniques.

Natural gas as a fuel for internal combustion engines isn’t a new idea. What is new is how fast it’s penetrating new applications, including the heavy-duty truck market, in the wake of rising diesel prices.

Interest in natural gas as a viable Class 8 fuel skyrocketed during the unprecedented 2007-08 fuel price spike. That brief affair ended as prices dropped when the subsequent recession hit.

Today, interest is returning. The industry realizes that yesterday’s lower fuel prices truly are a thing of the past, says Robert Carrick, vocational sales manager of natural gas for Freightliner. “Every time the prices retreat, they’ll stay at a higher level instead of dropping all the way back down,” Carrick says.

Even if the natural gas infrastructure is lagging, competition is driving the heavy-duty truck marketplace, says Jonathan Burke, vice president of global market development for Westport.

“We’re seeing all of the major truck manufacturers step up and invest significant amounts of capital in making a huge range of new factory-built vehicles,” Burke says. This is borne out by recent announcements from Volvo, Mack, Peterbilt, Kenworth, Navistar and Freightliner. All of these companies are investing heavily in natural gas technology and products. Freightliner recently completed a high-profile drive from San Diego to North Carolina in natural gas trucks fueled only at publicly available natural gas fueling stations.

New engines are on rapid development tracks throughout the industry, but pull open the hood on a natural gas truck today, and odds are there’s a red block sitting there. Cummins, through its Cummins-Westport joint venture, is the largest provider of natural gas heavy-duty engines in North America with 8.9-liter and soon-to-be-released 12- and 15-liter offerings based on its own ISG diesel engine.

Natural gas trucks are expensive, though they have a fast return on investment due to the decidedly lower cost of natural gas. A new natural gas truck can cost as much as $40,000 in incremental upcharges over a conventional and comparable Class 8 diesel truck, says Greg Treinen, segment manager, distribution and services/alternative fuels, product marketing for Freightliner. These upcharges are not likely to go down eventually, as they are a result of higher-priced components such as highly specialized fuel systems and tanks that will not cost much less  even if economies of scale come into play.

Despite its limitations of power density and range compared to diesel, natural gas appears to be working for those willing to accept those tradeoffs in return for lower fuel prices and the noble goals of running a greener operation and taking a small step to wean the United States off foreign oil.

“You have to run a lot of miles with the trucks if you’re going to make this investment pay off,” says Phil Crofts, director of marketing for Burr Ridge, Ill.-based Dillon Transport, which is testing a Peterbilt with a 12-liter LNG engine. “At first, we were unfamiliar with the new engine, the electronics and things like that,” Crofts says. “But the fuel is performing almost as advertised.”

Crofts says the truck isn’t getting the utilization Dillon had hoped. “What we’ve learned is that if you’re only going to run 100,000 miles a year, natural gas is probably not going to pay off,” he says. “We run our trucks 250,000 to 300,000 miles in a year, and we’re saving some sizable chunks of money with those mileage figures. But a lot of that goes out in increased maintenance and in other areas – spark plugs, oil changes and things like that.”

“Generally speaking, fleets operating on longer routes should ensure they are running on a defined natural gas corridor,” says Steve Weiner, alternative fuels marketing manager for Peterbilt. “If the routes are stable, then you can put fuel where you need it. If the routes change frequently, then it can be challenging to ensure fuel availability.”

There’s a simple rule of thumb when looking to convert from diesel to CNG or LNG, says Nadine Haupt, director of alternative fuels for Navistar. For LNG, about twice as much fuel is needed compared to diesel. CNG requires about four times as much as diesel.

On smaller routes, CNG is usually more practical because the tank packaging and weight considerations on the chassis are more doable. But for long haul or regional haul, LNG often works, depending on weight and packaging, Haupt says. “Then you have to take a look at what’s available in terms of infrastructure,” she says.

CNG fuel systems store compressed gas in cylindrical tanks at pressures up to 3,600 psi. CNG requires compression to get the fuel into the tanks, and stations are designed for refueling vehicles to meet fleet requirements ranging from a few minutes (fast fill) to several hours (slow fill). Fast fill can increase the temperature of the gas, which can result in a lower fill volume. LNG, stored as a liquid, is pumped into vehicle tanks in a similar fashion as diesel or gasoline, but since LNG is extremely cold, protective clothing and eyewear should be worn.

A look at refuse and many medium-duty applications showcases the differences between CNG and LNG, says Steve Gilligan, vice president of product and marketing for Navistar. “These are trucks that typically come home every night to the same location, and they’re generally fueled overnight,” Gilligan says. “That scenario lends itself perfectly to CNG. The trucks can be hooked up to a slow fill, fill overnight and the next day are ready to go.”

Running Class 8 trucks over the road is much different, Gilligan says. If the trucks are not coming home every night, they need enough range to get to the next available fuel station. “If you’re running longer distances or need a more compact vehicle, you need to look at LNG because you get a better packaging on the vehicle and faster refueling times,” he says. 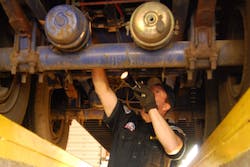 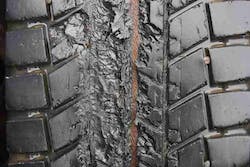 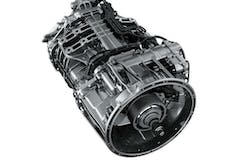 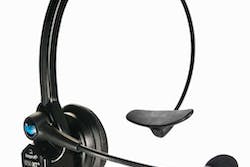