Virginia Gov. Bob McDonnell is expected to sign a bill requiring legislative approval to toll Interstate 95. Meanwhile, Connecticut lawmakers are eyeing proposals that could include tolling I-95.

Numerous groups, including the American Trucking Associations and NATSO, vigorously campaigned against tolling I-95 and consider the bill a success.

The legislation eliminates Virginia existing fuel tax at the pump and substitutes several sales taxes. Wholesale diesel will be taxed at 6 percent, wholesale gas at 3.5 percent and both would be indexed for inflation. General sales tax on most goods would increase from 5 percent to 5.3 percent.

Meanwhile, Connecticut’s joint transportation committee passed five proposed bills on voice vote regarding tolling Feb. 25. Proposed bills are legislation that is not fully drafted and is introduced by legislators at the beginning of a session.

The proposals do not stipulate which interstates would be tolled, save for one bill to establish tolls to extend Route 11. However, the Connecticut Department of Transportation began an extensive study on congestion pricing for I-95 last year.

Mike Riley, president of Connecticut’s Motor Transport Association, spoke against the plans, which range from simply allowing tolling, to implementing tolls at borders only and using a congestion pricing system.

In recent years, federal and state officials increasingly have considered tolling to maintain and expand infrastructure. Current law allows exceptions to the federal prohibition on interstate tolling, such as to add lanes or infrastructure such as a bridge, according to a Feb. 13 Congressional Research Service report.

Commissions established under the 2005 omnibus transportation law recommended allowing expanded tolling of Interstate highways. Still, the CRS noted that despite states increased interest in tolling, the federal Commerce Clause may hold legal implications against implementing it on Interstates. 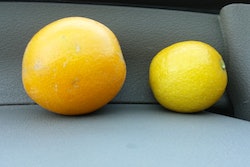 Barefoot with a stolen lemon