On the afternoon of March 22, representatives of driver-training schools, fleets who do their own training and, representing a majority of attendees, professional drivers gathered in a conference room at the Mid-America Trucking Show in Louisville, Ky., for the second of two listening sessions aimed ultimately at answering a very simple question, said FMCSA Administrator Anne Ferro, on hand for the session: ““How much safer is a driver who has been trained [formally] in the long run” than one who hasn’t?

The MAP-21 highway bill passed last year directed the FMCSA to finish its work on the entry level driving training (ELDT) rule begun well before the FMCSA existed, Ferro said. The listening session was a key element in agency’s information-gathering efforts toward issuing a new Notice of Proposed Rulemaking for revised training rules, hopefully in early 2014.

The session got under way with representatives of driver-training schools lodging formal objections to the school-accreditation requirement written into the agency’s 2007 Notice of Proposed Rulemaking on entry-level driver training requirements. Lou Spoonhour, representing the Commercial Vehicle Training Association with 180 member training locations throughout the United States, argued for a performance-based standard for testing rather than a training-hours-based standard. “What should an entry level driver be able to do?” he asked. “We think the answer to this whole entry-level-driver-training situation lies in performance.”

Spoonhour referenced the American Association of Motor Vehicle Administrators’ work on CDL testing requirements and gave an example of a current testing requirement — backing a combination vehicle 112 feet in a 12-ft.-wide space “without encroaching on either side,” he said. “I can tell you from our experience, we have students who can get in that truck and, the first time, back in with no problems.”

With a performance-based ELDT standard, such a driver would have satisfied the training requirement easily without mandated hours requirements of training.

In the words of 38-year OTR driver and sometime driver trainer Lee Strebel, also commenting at the hearing, “Some guys learn a lot faster than others.”

At once, Strebel, responding to a question from FMCSA Associate Administrator for Policy Larry Minor, said he thought 300-400 hours of intensive behind-the-wheel experiential training would not be unreasonable for a requirement of entry-level drivers, as long as it was true training. He echoed former company driver and owner-operator Jeana Hysell, speaking in her current role as Director of Safety with the Safety Compliance Professionals consulting group, when she asked regulators to abolish the “team concept” of entry-level training practiced by some trucking companies and require at a minimum 3-5 years of professional driving experience of active truck drivers before they could take on a training role with a carrier. In her role as a mentor to many new drivers, she said, “I’ve taken many calls from trainees not knowing what to do or how to handle certain situations, because their trainee was asleep in the bunk.”

Strebel gave the example of “so many companies out here,” he said, who “will take a guy through the training process” and put him “out two months tops with a trainer, then out on his own,” before four months later bringing them into the office and saying, “Hey, we want you to be a trainer.”

Video of the four-hour session is archived via the DOT’s TVWorldwide.com page at this link. Register there to view the archived webcast, and drivers wishing to add further commentary to the official ELDT docket can follow one of the following procedures: 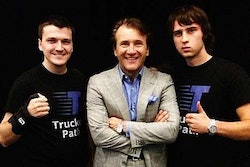 Does Anne Ferro have a driver’s license?