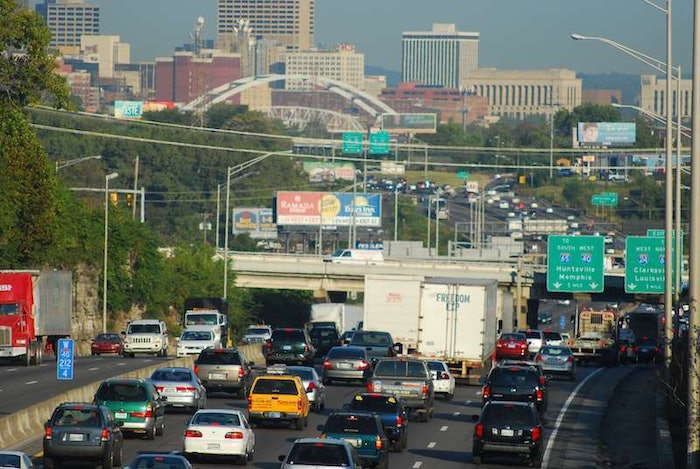 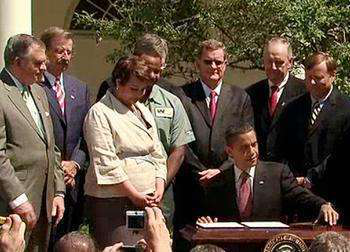 President Obama signs the original heavy truck fuel efficiency standards in 2011 at the White House, alongside Cabinet members and representatives from the trucking industry.

The trucking industry can expect another round of emissions regulations, courtesy a second-term climate change initiative from President Barack Obama. Truck makers, who worked with the White House on the original heavy-duty vehicle plan, say they support the effort to improve fuel economy — but any new standards must make economic sense for truck owners.

Tucked into a speech outlining the administration’s Climate Action Plan, which focuses on stationary sources of greenhouse gases (GHG) such as fossil-fueled power plants, the president also addressed energy conservation.

“The fuel standards we set over the past few years mean that by the middle of the next decade, the cars and trucks we buy will go twice as far on a gallon of gas. That means you’ll have to fill up half as often; we’ll all reduce carbon pollution,” he said Tuesday. “And we built on that success by setting the first-ever standards for heavy-duty trucks and buses and vans. And in the coming months, we’ll partner with truck makers to do it again for the next generation of vehicles.”

Though the president’s remarks regarding transportation were brief, the impact could be far-reaching: The trucking industry is still phasing-in those original heavy-duty fuel efficiency standards, set by the Obama administration in 2011. And even though truck and engine makers began announcing EPA certification for 2014 equipment as early as last year, the model-year 2018 GHG standards are more comprehensive and challenging.

Unlike automobile fuel efficiency standards, the truck measure does not set a miles-per-gallon target, given the multiple categories and different types of vehicles, along with the multitude of applications for which the heavy-duty vehicles are designed and built.

Still, the initial heavy-duty standards will reduce greenhouse gas emissions by approximately 270 million metric tons and save 530 million barrels of oil worth more than $50 billion, according to the White House. The new climate plan also notes that heavy-duty vehicles are currently the second largest source of greenhouse gas emissions within the transportation sector.

The president’s proposal comes on the heels of a report by the Diesel Technology Forum that one-in-four trucks on the road are now equipped with 2007 or later emissions mitigation technology and output almost no particulate matter.

And after the turmoil surrounding the expensive and performance-reducing engine technology developed to meet the rigorous federal limits on NOx in 2007 and 2010, heavy-duty truck and engine makers made sure they had a seat at the table for the original GHG program. Company representatives now say they will participate in the development of any new standards.

“Environmental care has long been a Volvo core value, so we support the administration’s ongoing focus on reducing greenhouse gas emissions,” says Susan Alt, senior vice president, Volvo Group public affairs. “We appreciate that the administration is again taking a collaborative approach and seeking the industry’s input for this latest round of heavy-duty vehicle standards. We look forward to working together to develop environmentally beneficial standards that also take into consideration the associated economic and operational challenges.”

Some in the trucking industry question the president’s new plan, however.

“The EPA’s insistence on using the same, one-size fits all approach has created a never-ending cycle resulting in no progress,” Owner-Operator Independent Drivers Association Director of Government Affairs Ryan Bowley says. “Smaller businesses put off purchasing new, and so older equipment remains in operation. Then the agency issues more regulations in response to no progress taking place.”

OOIDA notes that the original GHG adds $6,200 to the price of a new truck, according to estimates.

Additionally, based on Obama’s speech, the Keystone XL pipeline — supported by many in trucking — will face continued delays, with the White House directing the State Department not to approve the project if an analysis determines the pipeline would increase carbon emissions.

And while much of the trucking industry is taking a look at natural gas as an alternative fuel, the president did not announce any timetable for federal action.

“The president’s speech once again calls for increasing the use of domestic natural gas in heavy duty transportation, and he’s to be commended for that,” oilman and energy investor T. Boone Pickens said in a statement. “But it’s important to note that he has called for that before. A plan without action isn’t a plan, it’s a speech.”