The Federal Motor Carrier Safety Administration has started testing a new way to perform safety audits on new entrant carriers in an attempt to better focus resources on what it deems high-risk carriers, it announced this week.

The agency is testing whether off-site, remote safety audits can be as effective as the on-site audits.

Under current rules, the agency is required to perform on-site safety audits on all carriers within the first 18 months of their receipt of a U.S. DOT number. The current MAP-21 highway funding law tightens that to 12 months.

The on-site requirement is costly and inefficient, the agency says, and it devotes the same resources and time to on-site reviews of low-risk carriers as it does to high-risk carriers, it says.

All other new carriers will be sent a letter by FMCSA and asked to submit documents online. The agency will evaluate things like driver qualification, driver duty status, vehicle maintenance and accident register, it says. Based on its findings, it will either prepare a report saying the carrier passed the audit, ask the carrier for more information or schedule an on-site review.

The agency will conclude its testing in July 2014. It is currently only testing the program in California, Florida, Illinois, Montana and New York. 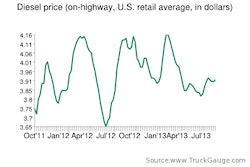