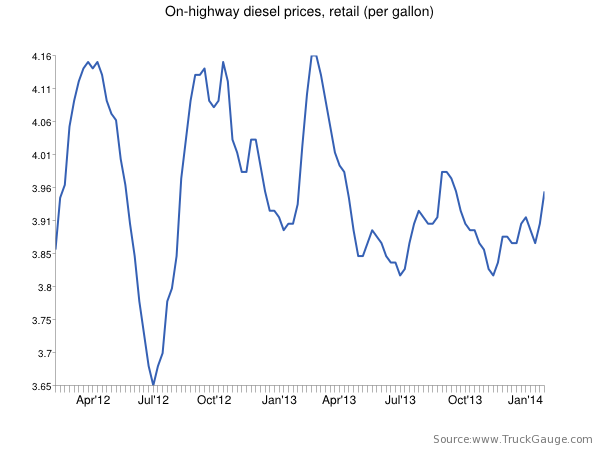 Colder than average temperatures and heating oil shortages therein are at least partly to blame for the price hike.

However, despite the price jump, the price of diesel is still 7.1 cents lower than the same week last year, when diesel was in the middle of a large multi-week pattern of price increases.

Average pricers also rose in all regions in the U.S., except for the Rocky Mountain region, which had a three-tenths of a cent drop.

The East Coast, particularly the New England and Central Atlantic regions — some of the hardest hit areas of the recent cold snaps — had double-digit price increases, rising 13.4 cents and 13.7 cents, respectively, as the East Coast as a whole jumped 7.4 cents.

The New England region again had the country’s most expensive diesel, $4.305, followed by the Central Atlantic, $4.281, while the Gulf Coast still has the nation’s cheapest, $3.775.