In 2010 the National Research Council completed a Congressionally mandated report on the technologies and costs for improving fuel consumption in tractor-trailers, buses, commercial trucks and other heavy vehicles. The series of findings and recommendations from that report was in part incorporated into the first round of fuel-efficiency and greenhouse gas emissions standards for medium- and heavy-duty trucks issued by the National Highway Traffic Safety Administration and U.S. Environmental Protection Agency in 2011.

With the second round recently announced by the Obama Administration, the Research Council offered a series of recommendations in a newly released report as the National Highway Traffic and Safety Administration and Environment Protection Agency develop rules aimed at the post-2018 time frame.

In light of greenhouse-gas (GHG) emissions tradeoffs that exist relative to natural gas — primarily the outsize effect of methane leakage — the council likewise urged that in setting the standards, agencies should consider “the maximum feasible capability of natural gas engines to achieve reductions in GHG emissions and fuel consumption.” Likewise, it singles out other factors such as the “uncertainties” surrounding “various engine and storage configurations that use natural gas, the impact of duty cycles on the ability to comply with the vehicle standards, the cost of natural gas vehicle technology and the rapid growth of the market for natural gas engines and vehicles.”

Regulating trailers, tires
The report calls for new standards for van trailers relative to their aerodynamic, fuel-saving properties, urging NHTSA to “adopt a regulation requiring that all new, 53-foot and longer dry van and refrigerated van trailers meet performance standards that will reduce their impact on fuel consumption and CO2 emissions.”

Also, other trailer types — including specifically mentioned “pups, flatbeds, and container carriers” — are recommended for study into practicality of regulation for fuel-efficiency.

Low-rolling-resistance tires in tractor-trailer combination setups are called out in the report, which urges NHTSA to study potential efficacy of a “low rolling resistance performance standard for all new tires designed for tractor and trailer use.”

The report also specifically calls out the need to focus on new tires sold as replacements.

Titled “Reducing the Fuel Consumption and Greenhouse Gas Emissions of Medium- and Heavy-Duty Vehicles, Phase Two,” the full report will be available via the National Academy of Sciences website. 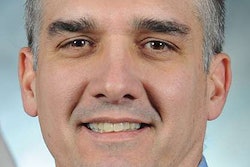