Woo hoo…back in the Precious and headed towards warm weather. Of course, this means traveling through tornadoes and windstorms (Arkansas, any day of the month during spring) and suffering the bad driving that is the norm on 35 between Dallas and Austin.

George swears no one in Austin has a job. He says people call each other and make plans to follow one another around in their cars all day, because that’s the only way Austin can have rush-hour traffic indefinitely. It does seem strange to see wall-to-wall traffic at 10:30 in the morning — even the bridge across the Ohio River from Kentucky to Cincinnati clears out around 10 in the morning. I think there are just too many people – Texas finally filled up and needs to shut the doors. (It’s a figure of speech, not a racial statement, for goodness sakes. Stop it. My Grandad used to say it was time to close the doors anytime we were somewhere crowded, and the fact I have to explain that makes me sad beyond belief.) Anyway, I don’t know if anyone has a job, but I do know they have an odd fascination with the center lane of traffic.

What’s the deal with the center lane? Are there magic beans I’m unaware of that your vehicle sucks up and makes unicorns out of? Why do people feel the need to ride the center lane, regardless of the flow of traffic, like their lives depend upon it? People will absolutely careen around you to get to the magical center lane, then they either lose all interest in life and decide to slow down to the pace they should be doing in the slow lane. They then ignore the slow lane – it no longer exists in their minds, no matter how many people pass them on the right. I’d like to point out that most of the corridor is left-lane restricted for big trucks, so when you get two knuckleheads fighting for a place in the coveted center lane, the big trucks are left to hang behind and observe the idiocy from afar.

It’s even worse when you get two big trucks, both governed at 65, battling it out while traffic lines up behind them. Really girls, you’re both pretty, now get the hell out of the way. I heard a driver comment on the CB today, and it provided the perfect biting wit truck drivers are often known for.

“Hey KLLM, let’s not make a career of it. Move on over so we can get there before we’re all old.” 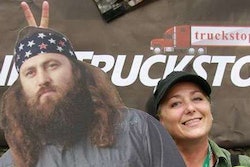 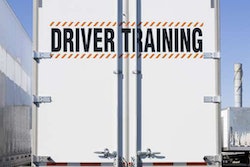