We’re home this weekend because the boy is attending his first prom. I’m not allowed to talk about it or post any pictures of it, apparently the prom is now an extremely covert affair, where it’s absolutely ridiculous to rent a tux or make reservations at a decent restaurant. I guess everyone just rolls in at their leisure, bow-tieless, wearing “vintage” clothing they found at thrift stores, after having full meal deals at Arby’s. I’m told, “things are different, Mom” [aka – Cryptkeeper, Ancient One, Mother of Cleopatra, etc.]. I did insist on a haircut and a decent suit jacket and he opted for a tie himself, although he would not relinquish the filthy, torn Vans he wears on his feet. Homeless people have better shoes, but he loves them and they make him happy, so I’ll compromise.

It’s been fun watching him negotiate this. He’s been to dances before, but this is prom and he’s a Junior and it’s a little bit of a big deal, whether or not he wants to admit it. He had to do some work around the farm to earn money for this date – and he got an idea really quick of how expensive a full time girlfriend could actually be. I listened to him ordering the wrist corsage from the office – laughing the whole time. I could only hear one side of the conversation, but it went something like this:

“Uh, I need a flower for my date’s arm. A wrist corsage. Yes ma’am. I’d like cream-colored roses. Yes ma’am. Three? Can I get three? How much is that? Thirty-five dollars?! Wow. How about we go with two? Um. I don’t know. Her dress is green? Um. Well, how about silver? Silver ribbons? OK. Can I pick it up Saturday? Really!? Twenty-six dollars!? OK. I’ll be there. Thanks, bye. MOM! Can you pick my flowers up on Saturday by noon?!”

He earned a little over $150 for the work he did, and between the corsage, dinner, tickets ($30 each for prom tickets!) and pictures, he might have enough money to buy her a milkshake on the way home. His dad and I picked up the expense of the haircut and new clothes – everything but the jacket he’ll wear to school, and none of it was expensive, so yay.

George will take him to the side before he leaves and put a $20 in his pocket “for emergencies only,” because that’s the kind of dad George is. He’ll fix his tie and collar and tell him some guy stuff, and pat him on the shoulder as he’s sending him off.

It’s scary as hell watching him go away and start becoming a grown-up. Our daughter was born a grown-up — she’s always been one of those kids who was innately responsible and super-intelligent about most of her choices. (Note that I say most. Enough said.) Our son seems so young compared to how she seemed at 17. I can only hope we’ve given the kid enough tools to work out situations he encounters with the same intelligence and maturity.

So it’s prom season. Be safe out there and watch out for kids who are acting even worse than usual on the highways. Who else firmly believes there should be an 18-and-older law for highway use in a four-wheeler? 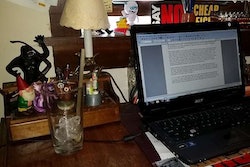 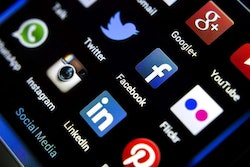