Not wanting to mess with success, the Senate Environment and Public Works committee delivered the policy portion of a six-year surface transportation reauthorization late Monday.

The plan essentially extends MAP-21 – the generally well-received current federal funding program – maintaining spending levels for highways and transit while allowing for increases due to inflation. Spending on federal-aid highway programs would grow from $38.4 billion in 2015 to $42.6 billion in 2020.

Along with the spending comes a call for “greater transparency” on the use of federal funds “to show taxpayers where their infrastructure dollars are being spent and reinforce public trust,” according to the EPW summary.

Additionally, the bill includes some adjustments to the federal freight program established under MAP-21, changes designed to make it “formula-based” and to expand flexibility for rural and urban areas – representatives of which have questioned the initial key regional corridors – to also designate key freight corridors.

The EPW committee will review the bill and any member amendments Thursday.

The bill does not include two key provisions being pushed by the White House and included in its version of a highway bill, released earlier this month: The allowance of tolling on existing Interstate lanes and the requirement that drivers get paid at least minimum wage for on-duty time not spent driving.

The Obama administration is standing by its bill, and Secretary of Transportation Anthony Foxx is making several appearances this week trying to drum up support for their version.

Foxx did say he’s “encouraged” by the Senate bill, but still sees the White House bill as the better option.

“We believe our bill is one that’s going to do dramatically important things for this country:  increasing investment, making sure that our country is moving forward with projects at a faster clip, and ensuring that we’re going to relieve some of these freight chokepoints that are going to become problems in the future,” he said.

Foxx declined to answer a question about the likelihood of a transportation bill being passed before the fall elections, and said that Congressional indecision and 27 short-term extensions over a recent 5-year stretch put communities at risk.

Funding for the Senate bill, too, still is in the hands of the chamber’s finance committee, who has yet to produce a way to fund the EPW’s plan. 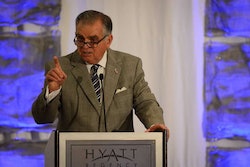